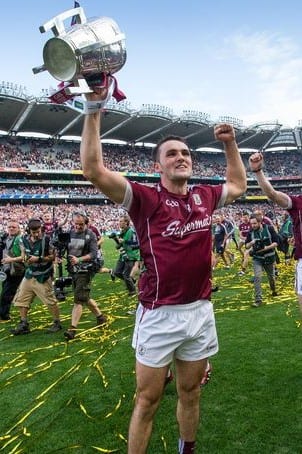 Galway midfielder Johnny Coen has described his first experience of a major hurling event when he was brought up to Antrim for the All-Ireland Feile Finals as a child.

As part of the GAA’s ‘Drawn Stories,’ where inter county players recall major moments in their life or career with the help of animation, the Loughrea player said he never had much interest in hurling beforehand.

Standing in the parade in front of a big crowd before a match had a young @Galway_GAA Johnny Coen hooked. He recalls one of his earliest GAA memories here with the help of animation. It's #GAADrawnStories! pic.twitter.com/7gkk9VvSKX

“Growing up really,” said Coen.  “I hadn’t a whole lot of interest in hurling.  I was a late bloomer.  I only started when I was nine years of age.  I was into playing nintendo and things like that.  I was playing a bit of Donkey Kong and Super Mario Bros and things like that as well.

“My older brother, about five years older than me, he’d won the club Feile.  They actually went on up to Antrim to play in the All-Ireland series.

“I was lucky enough there was a spot on the bus and I was brought along.  As it turned out, they gave me the tracksuit and the gear and the whole lot.  And as a young fella, you’re thinking you’re part of this.  It’s great.

“There was a parade before the final and they brought out all the subs.  They thought I was a sub as well because I was wearing a tracksuit as well.  Your man told me to come out and do the parade as well.  So, I was there.  I was only a small nipper of a young lad.

“To get a little taste of a bigger occasion, of a bigger day.  And to get out on the field as well, it’s just a great taster to get.”

Loughrea meet Sarsfields in their next fixture of the 2018 Senior Hurling Championship on Saturday, 15th September.  Throw-in at Duggan Park, Ballinasloe is 5.30pm.