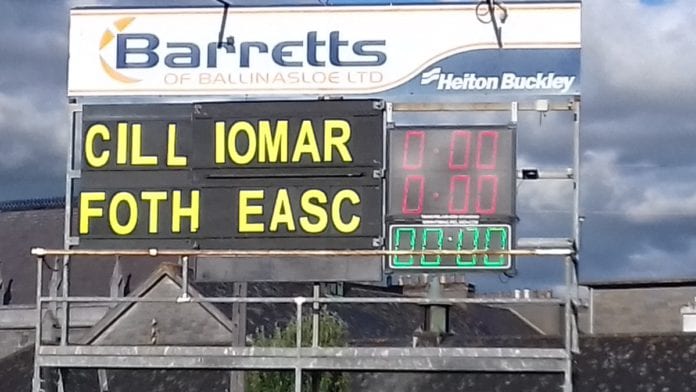 It took this county final time to get going in a dramatic finish that forced another day out to separate these teams.

With 15 minutes remaining, Ahascragh/Fohenagh led 2-7 to 0-7 and before Killimor turned up the temperature in a pulsating finish to go ahead in injury time before two Niall Glynn frees saved the tie.

Under 16 B1 Hurling Championship Final Latest in #DugganPark

Killimor were favourites but Ahascragh/Fohenagh hit the ground running and were two ahead by the fifth minute through Glynn and Robert Greene.  But 60 seconds later, Shane Treacy opened his account to reduce the deficit to 0-2 to 0-1.

The contest didn’t lack commitment but the shooting was well below the desired standard and the two sides shared 12 wides in the first half.

Cian Forde, the game’s top scorer, got his first free on 16 minutes to level affairs but Killimor were dealt a blow in the next attack as Craig Naughton found the net for Ahascragh/Fohenagh.

It gave Kevin Greene’s team a boost and Robert Greene took advantage with a brace to put five between them.  Forde replied with his own double but another Naughton point in between had Ahascragh/Fohenagh 1-5 to 0-4 ahead at half-time.

There seemed no doubt about the winners within four minutes of the restart.  A Glynn ball on the right dropped over the crossbar but on 34 minutes, Caolan Glynn picked out Robert Greene for the second goal and Ahascragh/Fohenagh were 2-6 to 0-4 clear.

Forde kept Killimor in touch with three frees by the 43rd minute with Robert Greene contributing in between but few, even the most optimistic Killimor supporters, envisioned what came next.

Neil Fitzgerald scored from distance before Forde found the target.  And then the latter got Killimor’s goal on 46 minutes making it 2-7 to 1-9.  Two minutes later, Treacy split the posts from 60 yards before Forde’s free on 51 minutes gave Killimor a surprising lead.

However, Ahascragh/Fohenagh struck a third goal through Fintan Glynn before Niall Glynn added a point.  But Killimor’s hit five unanswered minors.  Fitzgerald and Forde (2) restored parity before Treacy gave them the lead and Forde seemed to hit the winner on 59 minutes.