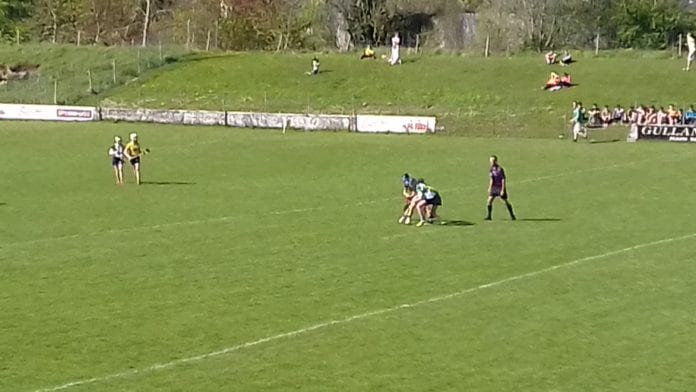 Shamrocks won an exciting tussle in the final game of Ballinasloe’s triple header as they edged home by one point to win the A1 Cup.

It looked like Shamrocks were home and dry when Niamh McInerney pointed and Kate Skelly struck their third goal to give them a 3-2 to 0-2 advantage within 60 seconds of the second half.

But it lit a fire underneath Craughwell who came storming back and were level within three minutes.

Jade Whelton got the touches for the first two goals to reduce arrears and Emily Miskella found the net on 24 minutes to have the teams level for the first time.

The scoring dried up after but the excitement never stopped.  McInerney maintained her influence as she sent over a free plus a point from play on 32 minutes to keep them to the front.

But a critical moment came two minutes from time.  Craughwell attacked as Grace Leen set up Miskella who sent a fierce shot at goal.  Shamrocks keeper Ciara McClearn proved equal to the task making the save at the expense of point and effectively secured them the trophy.

It would have been hard luck on Shamrocks had they not prevailed though Craughwell deserve great credit for coming back.

McInerney’s free ended in the net after just 23 seconds to give Shamrocks their first goal.  And when Skelly found Leah O’Halloran for the second green flag on six minutes, it looked to be one-way traffic.

Miskella sent over two frees to reduce arrears but McInerney also contributed a placed ball to give Shamrocks a 2-1 to 0-2 interval lead.  And when they hit 1-1 in the second half, it looked enough for the spoils before Craughwell’s comeback guaranteed an exciting finish.

Two men due in court this evening after €166,000 cannabis seizure