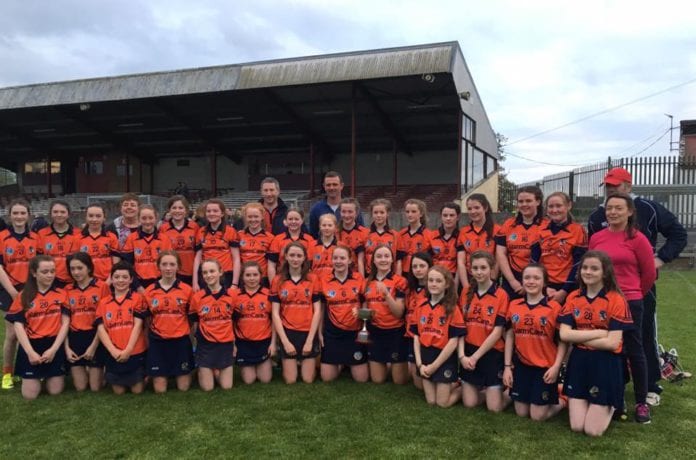 The under 14 (Feile) county camogie finals have been announced with three triple headers scheduled for the May Bank Holiday Weekend with one contest taking place on Wednesday (2nd May).

Loughrea will be the venue on Saturday (5th May) for the first of multiple match cards with the main event taking place.

Davitts will meet Abbeyknockmoy in the A Cup Final at 4.20pm finishing off a card that also includes two more finals.

Killimor take on Ahascragh/Caltra in the B1 Shield decider at 2pm.  And Ardrahan clash with Liam Mellows in the B Cup Final at 3.10pm.

The first final on Wednesday also takes place in Loughrea when Kilconieron face off with Pearses at 7pm in the B Shield showpiece.

Duggan Park, Ballinasloe will host three matches on Sunday (6th May) starting with the B1 Cup meeting between Salthill/Knocknacarra and Clarinbridge.  That will be followed at 3.10pm by the C Cup clash involving Craughwell’s second team and Skehana/Menlough.

And to cap off the card, the A1 Cup match at 4.20pm sees Craughwell’s first teams take on Shamrocks.

And another three games are scheduled in Clarinbridge starting with the A1 Shield meeting of Mullagh/Kiltormer and Turloughmore.

The A Shield match between Athenry’s first team and St. Thomas will take place at 3.10pm.  And Athenry’s second team will conclude the action at 4.20pm when they meet Cois Fharraige at 4.20pm in the C Shield Final.

Ten teams go in search of county silverware in three venues before all the teams will compete in the National Feile competition in June hosted by Connacht, Westmeath and Longford.

A big shout out to hurling legend Joe Canning for his lovely message to Aoife here and our u14 Camogie girls.

They won the blitz and are off to Féile in June to @StThomassHC Galway.