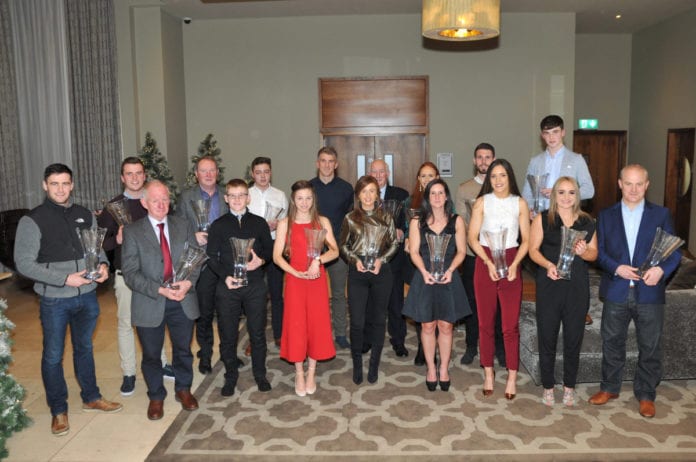 The Galway Bay FM Sports Awards took place in the Lough Rea Hotel & Spa on Monday, December 18th reflecting on a successful year for Galway sport and presenting trophies to the top performers in their respective fields.

Presented by Ollie Turner, Gerry Murphy and John Mulligan, 18 different prizes were handed out in front of over 200 people in a show that went out LIVE on the radio and on Facebook.

Pride of place went to the Galway hurlers whose All-Ireland senior title win in September was the moment of the year.  Micheal Donoghue collected the Manager of the Year award, Joe Canning won Hurler of the Year and David Burke picked up the Team of the Year prize.

It wasn’t just the Galway team that took all the hurling awards.  Liam Mellows’ historic victory in December in clinching their first county title in 47 years after they defeated Gort 3-12 to 1-15 was acknowledged and Adrian Morrissey was there for his team.

Football was represented as Kieran Fitzgerald, fresh from a 12th county senior title with Corofin, was that award winner.  Olivia Divilly, who helped Galway to Connacht senior and All-Ireland under 21 crowns as well as a fifth county title with Kilkerrin/Clonberne, was the Ladies Football recipient.

And Andrea Trill took the Ladies Soccer gong for her exploits with Cregmore/Clargalway FC and the Ireland under 17s but she also won Gaelic Football national titles with Colaiste Bhaile Chlair and Galway’s under 16s.

Recently departed Stevie Folan won the Men’s soccer prize for his performances, including a memorable winner against Derry City in September, for Galway United.  The former Newcastle United player came up through the ranks with Salthill Devon and now heads for a new challenge with Dundalk.

Tara Kenny’s displays with Galway and Sarsfields earned her the camogie award. A strong season in defence saw her win player of the match awards against Tipperary in the All-Ireland quarter-final and against Mullagh in the County Final.  She was selected for the All-Stars trip to Madrid in November.

Fifteen-year-old Patrick Dempsey won the Motorsport Award after becoming the youngest ever Irish Junior Champion in Mondello Park.  Diarmuid Mulkerrins’ heroics before storming to the All-Ireland minor handball crown saw him a recipient.  And David Kitt’s efforts in the Irish Amateur Close Championship where he reached the final gave the 17-year-old the golf award.

Emma Moore’s multiple medal hauls at the National Indoor, Outdoor and Cross Country Championship ensured her the Athletics award.  Dayna Finn won a National Intermediate Cup with Maree and played in a European under 18 Final for Ireland saw her the Basketball winner.  And Whitney Shephard from Knocknacarra was a double World Champion in Kickboxing rounding out the night’s winners.

The Liam McCarthy, Irish Press (minor hurling), Leinster hurling and national league trophies were on hand for photographs as was the Tom Callanan (county senior hurling) Cup allowing attendees their chance for photographs as Galway Bay FM wrapped up another year’s coverage.