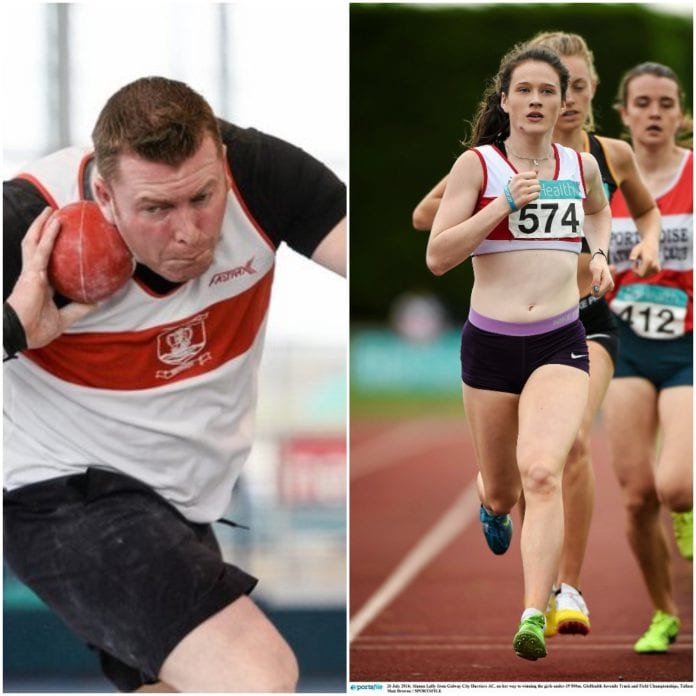 Sean Breathnach and Alanna Lally were crowned champions at the National Senior Indoor Athletics Championships over the weekend.

Held in the Sport Ireland National Indoor Arena in Abbotstown on Saturday and Sunday, Jerry Keary was also among the medals after taking silver in the Men’s High Jump.

Gold on the double for Galway today at the National Senior Indoors, Sean Breathnach of GCH won yet another National title, throwing an incredible 18.30 metres , a National indoor record, for victory! https://t.co/RROpLketCZ @gbfmsports

Thirty-nine-year-old Breathnach hit a national record of 18.30 metres on his way to defeating John Kelly in the Shot Putt competition.  The Connemara man always looked in control as the topped the field that included his brother Michael (4th) and Galway City Harrier’s Brendan Staunton (7th).

Lally, now competing for UCD AC, took a first senior win to go with her impressive collection of underage titles.  She came home for the gold medal in the Women’s 800 metres in a time of two minutes 8.71 seconds, three seconds ahead of Siobhan Eviston.

Alanna Lally UCD AC comes in a time of 2:08.72 in the women's 800m at the @irishlifehealth National Seniors

Craughwell’s Keary made it a hat-trick of medals coming west as his jump of 1.90 metres was enough to secure second spot in the High Jump, finishing behind Barry Pender who hit a height of 2.24 metres.