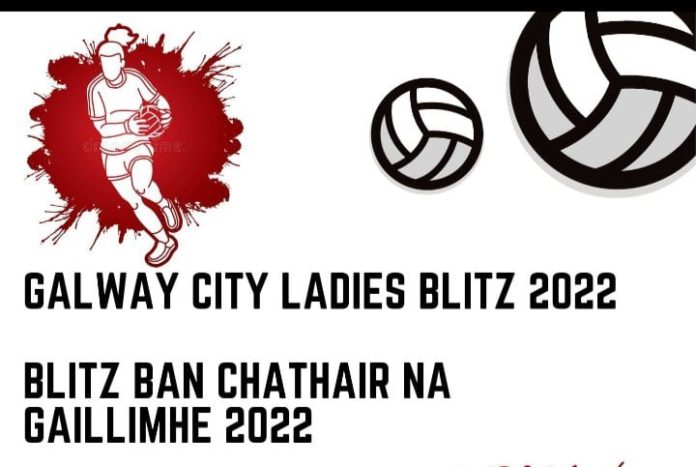 Gaeil na Gaillimhe GAA Club are holding an exciting event next week to promote women in sport, and the Irish language, with many clubs joining in.

The inaugural Galway City Ladies Blitz will take place on Monday, May 2 starting from 11am.

The novel sporting event is being hosted by St.Michaels Ladies GAA at Westside Playing Pitches and clubhouse.

The aim of the event is to promote girls and women in sport, through the use of the Irish language, whilst also building upon the existing Ladies GAA community within Galway City.

“The idea for the blitz was to help build upon the positive relationships and community spirit between ladies clubs in Galway” says Sheila Murphy, player, registrar, and committee member with Gaeil na Gaillimhe, who first proposed the idea.

Gaeil na Gaillimhe was first set up in 2016 to promote both GAA and the Irish language in Galway City, operating solely through Irish to do so.

Last year was a major milestone in its ongoing growth, with multiple significant achievements by the club’s teams.

Among those, the men’s team reached the Junior C Championship Final for the first time since the club’s inception.

Better still, 2021 also saw reaching the club for the first time when the ladies team won the West Galway Junior B Championship Final in early November.

When Gaeil na Gaillimhe was starting out they got lots of “positive encouragement and support” from existing clubs, Sheila Murphy said.

This event is a further fun way to bring clubs together and play some football, while also promoting the language in a friendly, welcoming way.

The event is being funded by Glór na nGael, an Irish language organisation funded by Foras na Gaeilge that promotes Irish in the family, business, and community development.

“As a club that proudly functions through Irish we are delighted to get funding from Glór na nGael to help us bring this blitz to fruition”, Sheila adds.

There has also been great community support, with additional sponsorships from The Front Door Pub, Schweppes and Joyce’s Supermarket.