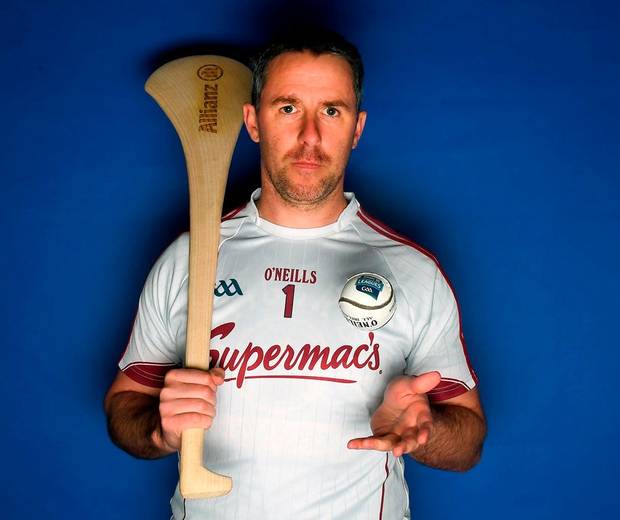 Colm Callanan has announced that he is retiring from inter county hurling after 13 years in goals wearing the maroon and white.

The 37 year old Callanan announced his retirement with statement released by Galway GAA this week.

“It’s a massive privilege to play for your county and I feel honoured and proud that I got to play for Galway for as long as I did. I was lucky enough to win everything on offer at least once

“I was blessed to have shared a dressing room with such brilliant people throughout my career, which enabled me to forge friendships that will last a lifetime,” Callanan said.

“It was an honour to go into battle with all of those Galway players, while it was also a privilege to get the opportunity to play against the very best players from other counties.”

Callanan thanked all of the managers, coaches, and backroom team members who have supported him through his years with Galway.

He gave a special shout out to the managers he’s played under, Ger Loughnane, John McIntyre, Anthony Cunningham and Micheal Donoghue, as well as Christy O’Connor, who was his goalkeeping coach before he even started playing for Galway in 2007.

“Christy opened my mind as to what was required at the top level, and he really lifted my standards,” said Callanan.

’m indebted to my club Kinvara for all their support and loyalty over the years. I want to pay tribute to all the coaches that helped me improve my game, which enabled me progress and go on and play for Galway.

I’d also like to thank the various county board members which looked after us over the years.

“Most of all though, I’d like to thank my family. My wife Jen has always provided the amazing support which allowed me to chase my dream for so long.”

“Her patience and understanding facilitated the longevity of my career, especially with our two young kids at home, Ciara and Daniel. I hope I made ye all proud.”

“I’d also like to pay a special thanks to my parents, Mary & Gerry and my sisters, Colleen and Roisin. It was the best feeling ever to share some of those golden moments with them after matches.”

Callanan said that at the end of the day his is content that he gave all that he could to Galway for 13 years.

“I’ve loved every minute of my journey and to have played in front of its dedicated and passionate supporters has allowed me to make memories that I will cherish forever.”

“I’d also like to thank Shane O’Neill for his understanding and support of my decision. I’m also delighted that the transition will be made easier after accepting a coaching role in Shane’s new backroom team.”

“Let the next chapter begin! Up Galway! “