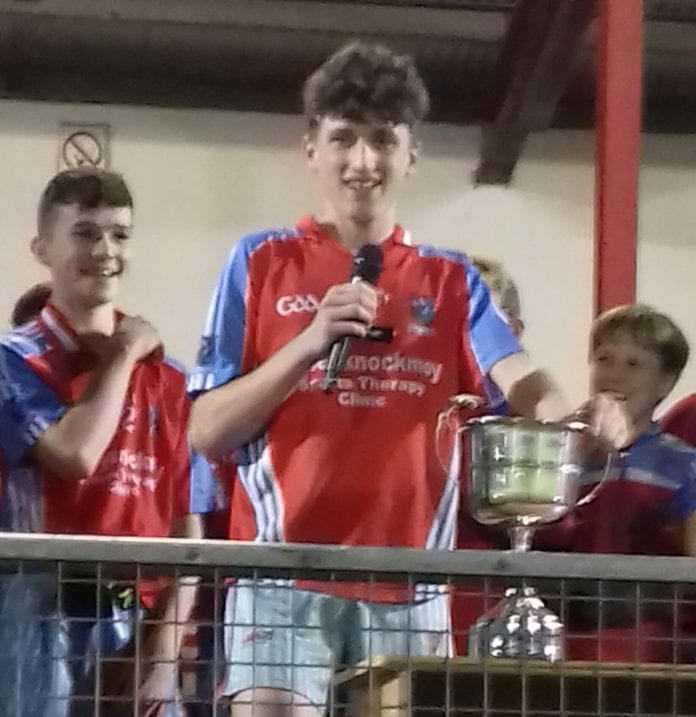 A 10-minute opening spell set Monivea/Abbey up for victory before they added four scores after the interval break to ensure league glory in Ballinasloe.

Niall Mannion was denied by the crossbar before Dara Burke opened their account on five minutes.  But when Mark Crehan finished a move involving Mannion and Daire King 60 seconds later, Monivea/Abbey were four ahead.

Lewis Ryan and a Glenn Kelly free made it 1-3 to 0-0 for James Mannion’s team but they managed to go the rest of the opening half without scoring.

Six first half wides didn’t help but St. Gabriel’s also started to settle and Padraig Downey’s team played their way back.  A Cormac Kenny free on 19 minutes got the Kilconnell outfit off the mark before Lewis Coughlan split the posts three minutes before the break.

A key moment came just beforehand for St. Gabriel’s when John Cosgrove and Liam Collins played their part to put Coughlan through but wing forward’s low effort went wide of the post.

Monivea/Abbey stayed out on the field at half-time as they tried to correct their shooting malfunction and it worked immediately upon the restart.  Burke pointed after just 25 seconds before a Kelly free made it 1-5 to 0-2.

Jamie Collins and Burke set up Ryan for another before Burke’s third from play, thanks to Sean Lydon’s pass, put eight between them on 41 minutes.

St. Gabriel’s scoring return improved in the closing stages and they added three further scores through Tom Cafferky (2) and Coughlan but really needed a goal to save this contest.

Monivea/Abbey kept their tally ticking with four more points through Jamie Collins, Kelly, Ryan and Burke to give them a comfortable seven-point win.  It secured them under 15 league glory and they continued that momentum three days later beating St. Gabriel’s 0-13 to 0-10 at under 16 level.