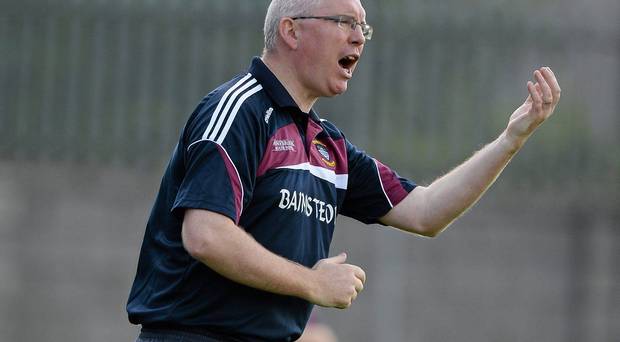 He looks set to become Galway’s next minor hurling manager but Brian Hanley’s attention last Saturday (20th October) was solely focused on keeping Beagh in the senior hurling championship as they beat Moycullen 1-19 to 0-20 in the relegation final in Loughrea.

Kevin Keehan’s goal just after half-time was important but seven unanswered scores in the final 10 minutes proved the difference as Beagh overturned a four-point deficit to lead by three before Moycullen’s Eanna Noone saw his late free go the wrong side of the crossbar.

The Athenry native joined the set-up as trainer in August and felt they were unlucky not to have picked up some results beforehand.  But their first win in 12 league and championship games in 2018 was the sweetest as it ensured they remained in Galway’s top flight.

“They’re a very honest bunch,” said Hanley.  “Since the middle of August, I came in with them and try and help them in some way.  They didn’t need much help.  They just needed a bit of the rub of the green.  They were very unlucky in the three other games I was involved in.

“We could have won possibly two of them and one of them, the Clarinbridge game, we gave away silly errors.  I think they showed great character today.

“(They) deserve to stay in the top flight.  Moycullen have been a great addition since they came up.   And it’s heartbreak for them and the same with Beagh.  They’ve done everything down through the years to keep up there.

“Kevin’s (Keehan) a great guy.  He’s coming up and down from Dublin.  He’s giving his heart.  There’s traditions in hurling and Beagh are full of it.

“I think we were three points down with six or seven minutes to go, to come back in the rally they did.  And that was in them and it’s a credit to them.”

With their underage teams joined with Kilbeacanty as Michael Cusacks, concerns about the future of Beagh hurling do exist as they aim to keep the numbers for years ahead.

But Hanley knows the talent they have coming through and had Connell Keane and Matthew Rosengrave as part of his Galway under 16 team that won the Eugene Carey under 16 Hurling Tournament in August.

“Beagh will have struggles with the numbers in the next couple of years but they can keep it together,” continued the former Westmeath manager.  “You’re up there in an evening and you see Rory and Joe (Gantley) and all these lads doing stuff with the underage up there.

“Enda Tuohey was a guy that I had at under 21 when I was with Anthony (Cunningham).  He didn’t make it with us but I think, as (time) has gone on, he’s Adrian brother.  And he stepped up to Adrian’s shoes today.

“We were missing Adrian and what happened to him (injury) was tragedy.  But they didn’t dwell on it.  They moved on.

“It’s them to push on and bring the likes of Connell (Keane) and Matthew (Rosengrave) that’s coming with others and the club will be fine.”

Beagh will participate in the 2019 Galway Senior Hurling Championship but Moycullen are relegated to the intermediate ranks.