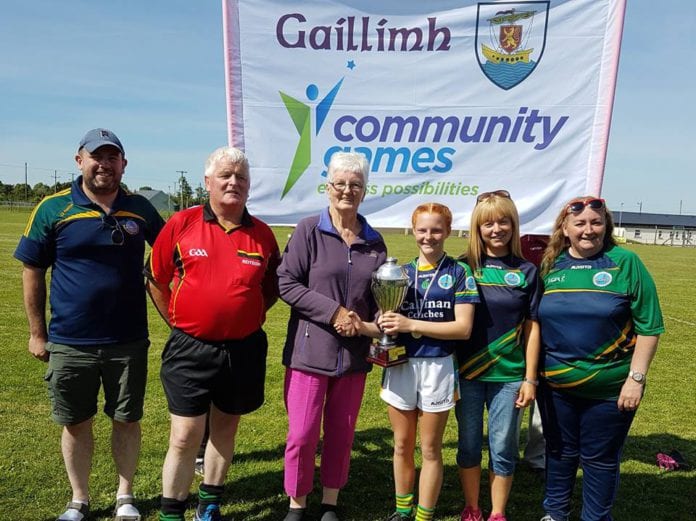 It was an entertaining day from 10.30am until 4.30pm when the last of the winners were decided as all 10 teams left everything on the field in search of silverware.

Next up was the under 10 mixed football final as Claregalway/Lackagh began their search for a triple crown.  For players so young, the skills showcased promising talent in the development of both areas and Claregalway/Lackagh edged ahead at half-time.

But Oranmore/Maree have been rapidly improving in football over recent years and showed they are starting a tradition as their young representatives worked hard tremendously hard in the second half to overturn the deficit and win 2-5 to 2-3.

The middle match was the under 11 hurling final with Clarinbridge standing in Claregalway/Lackagh’s way.  Both areas have produced quality players at underage level and showed no signs of stopping that progress.  And Clarinbridge took the spoils in a cracking tie winning 2-7 to 2-3.

Last up was the under 14 Girls Football final and after their earlier disappointments, it was third time lucky for Claregalway/Lackagh.  Managed by David Flaherty, Martina Collins and Linda O’Connell, they produced a master class against a spirited Oughterard outfit taking a 7-10 to 0-0 victory.

Ballinderreen staged an exhibition in underage gaelic games and Galway Community Games thanked all who assisted including the host committee and referees Kevin Egan, Pat Hansberry, John McDonagh and Tony Melia.  It was a day that showed the true spirit of Community Games.

The Aldi Connaught Community Games Finals will take place in Leitrim on Saturday, July 14th 2018 and all five winners above will represent Galway.