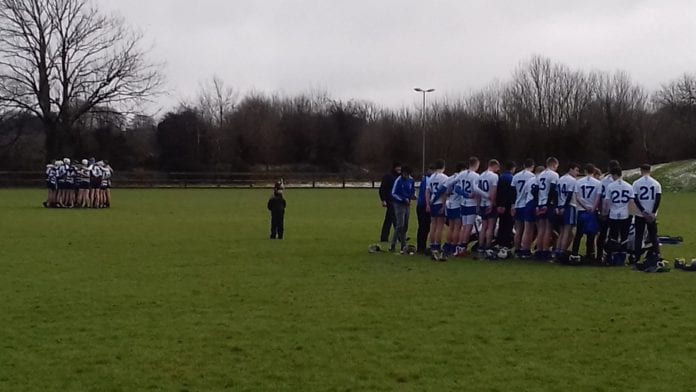 Two goals in the opening quarter from Sean Gardiner and Peter Zsiga gave Gort Community School a buffer in the Connacht GAA Centre as they booked a place in the Connacht Colleges Senior A Hurling Final.

Strong favourites entering the contest, it took time for Gort to settle as they hit nine first half wides plus an early goal chance for Connell Keane saved by Darragh Connelly.

Their opener came on nine minutes when after an Evan Hunt delivery wasn’t dealt with by the Bish defence, Gardiner’s touch got the sliothar over the line for Gort’s first goal.

Enda Egan added a 65 but another unforced error allowed Gort their second major.  Wing back Zsiga’s long ball was dropped by Connelly resulting in another goal and when Gardiner put over a free on 14 minutes, Gort led 2-2 to 0-0.

Gort were clearly on top in the first half with Jordan Nolan and Donal Moloney combining for a golden opportunity only to see it agonisingly go wide.  But both players made their mark raising white flags by the 25th minute making it 2-4 to 0-0.

St. Joseph’s eventually got off the mark with Sean Joyce converting a free but a Connell Keane score gave Gort a 2-5 to 0-1 interval advantage.

However, it was a different second period as St. Joseph’s, eligible for next week’s ‘B’ semi-finals, outscored their opponents by five points to four.

Joyce hit two placed balls in as many minutes after the restart before getting a third on 42 minutes.  It was eight minutes later before Gort got off the mark with Flannery getting his first of two to make it 2-7 to 0-4.

The Bish needed goals that never looked like coming and while they’ll rue their first half errors, they’ll head into the ‘B’ championship with confidence.  Joyce completed their tally with two more including their first from play on 62 minutes.

Egan and Keane completed Gort’s total beforehand but 13 wides will be a cause for concern ahead of February’s decider against Presentation, Athenry or St. Brigid’s, Loughrea.