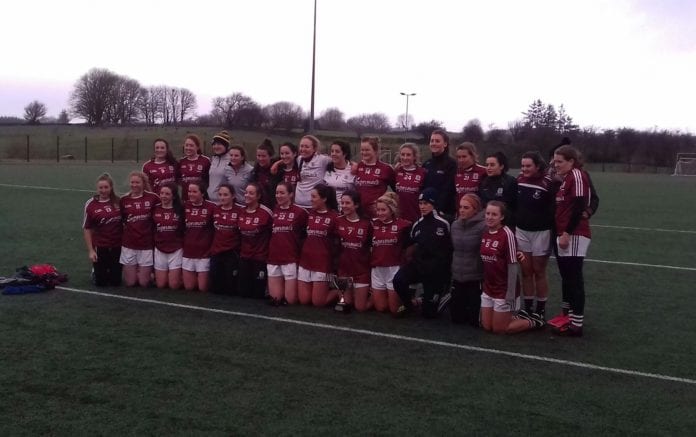 Sarah Conneally was the star performer with four goals over the hour with new captain Tracey Leonard and Leanne Walsh adding majors in a comfortable win for Stephen Glennon’s charges.

From the start, the Tribeswomen attacked with Conneally and Louise Ward troubling Mayo, who only started two of the 2017 All-Ireland final team.

Ward and Conneally contributed two points each as Galway took an early 0-4 to 0-1 advantage before Sarah Baynes opened Mayo’s account on nine minutes.

The front line double act were the instigators on 19 minutes as Ward set up Conneally to get the first green flag.  And two minutes after, Leonard’s long range free dipped over Corless for the second goal and Galway 2-6 to 0-1 clear.

Shauna Howley replied for Mayo but Galway’s momentum kept the scoreboard ticking.  Two Leonard frees and a Conneally point following good work from Chelsey Blade.  And Peter Leahy’s team were down two players at the break as Emma Lowther and Rachel Kearns were given yellow cards.

The third quarter tallies were dry as multiple substitutions were made.  Mayo changed all 13 players at half-time before adding two new names when the sinbins concluded.  And Glennon also looked at his options before their National League campaign commences next week.

Blade made it 2-10 to 0-2 before Rebecca Waldron responded for Mayo.  But on 43 minutes, Conneally struck again with Galway’s third major.

However, Mayo finally made a breakthrough with Grace Kelly netting for the hosts leaving it 4-10 to 1-3 entering the final quarter.

But Galway continued driving on.  Conneally completed her hat-trick on 50 minutes before adding a fourth in injury time; St. Brendan’s Leanne Walsh capped her performance with a 56th minute three-pointer; while Deirdre Brennan, Conneally and Emma Reaney rounded out Galway’s victory.

After retaining their crown, attention turns to the National League with Monaghan and Donegal games preceding another meeting against Mayo in Pearse Stadium on February 11th.  That should be a closer affair but Galway maintained the edge on their provincial rivals with a fourth consecutive win.