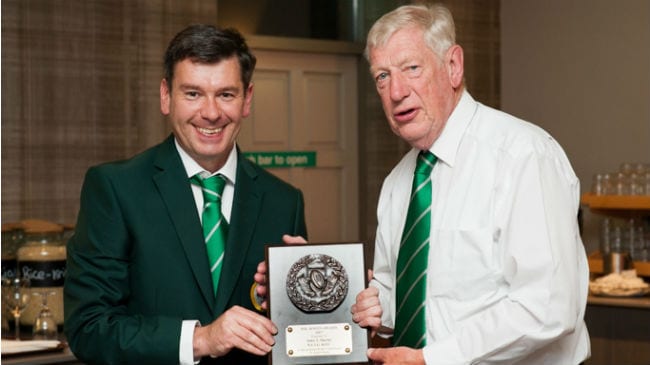 John Martin of NUIG Rugby is the 2018 recipient of the ‘Mr. Boots’ award for services to rugby.

The Mr.Boots award is presented every year to someone who has excelled in their work and contribution to Junior rugby and was introduced after the retirement of the great Willie John McBride back in 1980.

One of his last games was against Arklow RFC and afterwards he presented his boots as a memento hence the wording of the prestigious annual IRFU award.

Martin’s roles over the years included fixtures secretary and team manager for NUIG Juniors and Under-20s, referee and All-Ireland League touch judge for the Connacht Association of Referees.

He was also involved in organising Intervarsity Championships for the Irish Universities Rugby Union.  He is also involved in acting as fifth official and stewarding at Connacht matches in the Sportsground and received the Clubman of the Year Award at Connacht Rugby’s 125th Anniversary Awards in 2011.

The presentation took place in the Maldron Hotel, Oranmore on Saturday, 19th May.  There were 14 other previous winners in attendance including Tuam’s John Carr, Creggs’ Frank Pettit, Mick Grealish from Boys Club Galway and Monivea’s Padraic McGann.