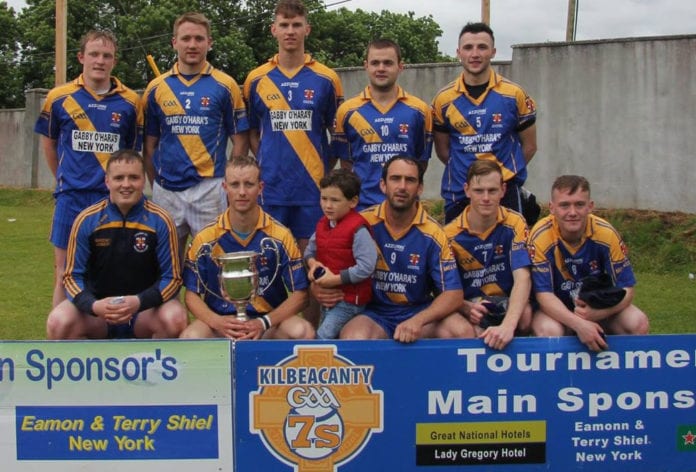 Nine hurling teams and seven in camogie will do battle in the traditional event that always attracts great interest and had its first staging in 1918.

This year sees the second year of the camogie 7s tournament carrying a €2,000 with the Quarter, Semi-finals and Shield final being played on the Sunday and the final before the hurling 7s final on the Monday.

Seven teams will begin the camogie event on Sunday evening (3rd June).  Sarsfields and Kinvara face off at 5.30pm before New Market meet Ardrahan at 5.50pm.  the winners collide in the first semi-final at 6.30pm.

Inagh/Kilnamona and Kilanana will take on each other in the third quarter-final at 6.10pm with the winners against St. Thomas 40 minutes later.  The Shield Final between the two losing semi-finalists will c conclude the day’s action at 7.30pm before LIVE! Music in McCarthy’s afterwards.

The 7s Hurling Tournament with a €7,000 prize fund begins at 2.45pm with the preliminary round game between hosts Kilbeacanty and Tubber.  The first three quarter-finals take place next beginning with All-Ireland 7s champions Beagh and Tommy Larkins at 3pm.

Defending champions Loughrea go head-to-head with County Champions Liam Mellows at 3.20pm before a south Galway showdown between Gort and Ardrahan at 3.50pm.  St. Thomas meet the preliminary round winners at 4.10pm.

The semi-finals take place at 4.30pm and 4.50pm before the Camogie 7s Final at 5.15pm.  The Hurling decider at 6.15pm wraps up the weekend before the closing celebration and more LIVE! Music in McCarthy’s from 8pm with Live Music by Mikey Burke and Fishing for Likes.

It promises to be cracking weekend and a full schedule of events can be found below or on Kilbeacanty HC Facebook and Twitter pages.