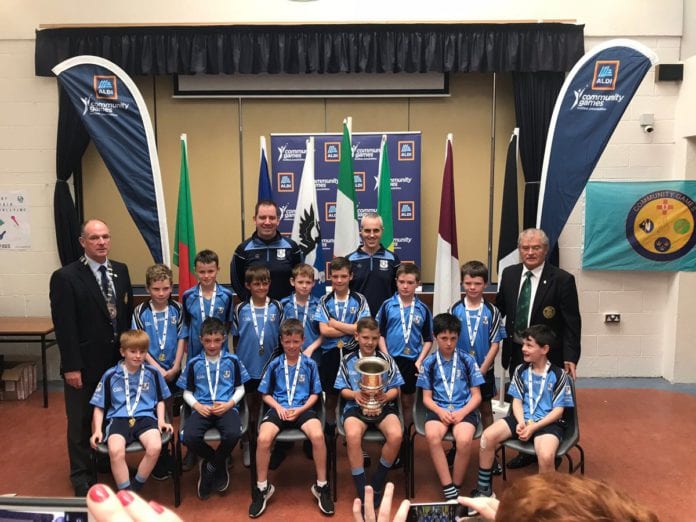 The Aldi Community Games Connaught Finals in July 2018 were a productive day for Galway as eight teams qualified for the National Finals taking place in University of Limerick this month (August).

With over 60 teams competing in Leitrim on Saturday 14th July across 22 events in 10 different sports, competition was fierce, yet exciting for all 800 competitors who participated.

What made Galway’s performance extra special was that their eight wins were achieved by seven different areas meaning a good spread of support getting behind the maroon and white at the three-day National Finals commencing August 17th.

Clarinbridge are the only area with two teams heading to Limerick.  Their under 11 hurlers had already pre-qualified with no opposition to oppose them in the province.  And they were joined by the under 12 boys soccer team who were 8-1 winners over Mayo’s Burrishoole.

Athenry’s under 15 girls team made it a soccer double when they 5-2 over Cliffony Grange from Sligo. And there was success in the girls under 13 Futsal event as Knocknacarra enjoyed an 8-3 success over Sligo’s Aughanagh.

Craughwell were deserving victors in the under 16 Boys Pitch & Putt event.  While Oranmore/Maree delivered an impressive display in the under 10 mixed Gaelic Football with a comfortable 14-9 to 3-5 result over hosts Carrick-on-Shannon in Páirc Seán Mac Diarmada.

Bullaun/New Inn were already through in the under 14 Camogie having won a competitive Galway championship.  And they were joined by Kilnadeema/Leitrim who emerged victorious in the under 14 Girls Spikeball competition.

Galway were unlucky not to get two more trophies as two sides just lost out in the final matches.  Annaghdown came out the wrong side of the under 13 Boys Futsal Final against Sligo’s Aughanah.  And Leitrim’s Drumshanbo denied Kilnadeema/Leitrim a second title in the under 14 Boys Spikeball.

All Winners will now represent Connaught Community Games at the Aldi Community Games National finals in University of Limerick on the weekend of 17th to 19th August 2018 and we wish them all the best of luck in the finals.