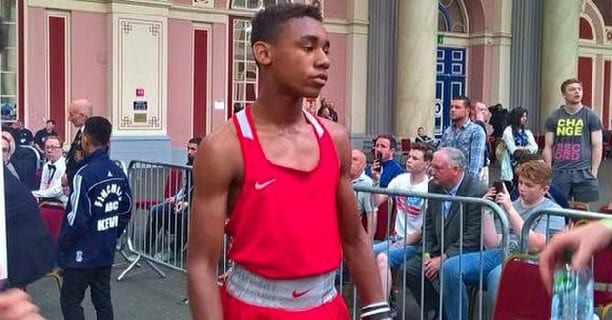 Galway’s Gabriel Dossen has qualified for the quarter-finals of the European under 22 Boxing Championships after beginning his campaign today with victory over Armenia’s Hambardum Hakobya today.

The Irish champion dispatched his opponent to move within one bout of a 75kg middleweight medal before Saturday’s semi-finals in the city of Targu Jiu in Romania.

Dossen has exploded on the boxing scene since winning the National 64kg under 18 title two years ago aged just 16.  He picked up a fourth Irish title in January to qualify for these championships with comprehensive displays against 10-time National Champion John Joyce and Drogheda’s Chris O’Reilly.

He also won medals at the 2016 World Youth Championships in St. Petersburg and the 2017 European Youths competition last October in Turkey.  And representing Olympic Boxing Club in Galway, he’ll be confident of continuing that success this week.

The former St. Mary’s College, Galway student has already been tipped for Olympic Gold by none other than Michael Conlon.  And the Ivory Coast born fighter will have that chance should he continue his success in his first Elite Championships in November and reach an Olympic qualifier.

Trained by Michael Mongan, a weights miscalculation has Dossen competing in the 75kg category but he should be back down to the 69kg light welterweight section later this year.