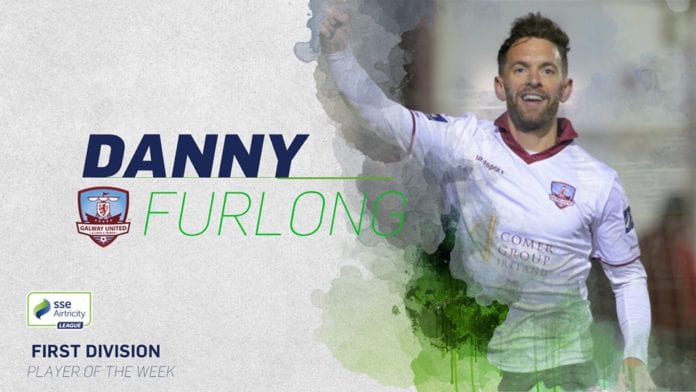 Galway United began life in the First Division on Friday night with a comfortable victory over Athlone Town in Eamonn Deacy Park.

Danny Furlong marked his debut with a hat-trick and Ronan Manning scored his first goal for the club before ex-Real Madrid player Felix Perez got a late consolation for the visitors.

After the Athlone defence failed to clear on 14 minutes, Furlong took advantage finding the bottom corner for the first goal.  And 20 minutes later, the ex-Wexford Youths striker found space following Marc Ludden’s cross to make it 2-0.

“Some of our passing and first touches were very sloppy,” said manager Shane Keegan to Galway United’s official website.  “It wasn’t anywhere near sharp enough.

“Danny (Furlong) was extremely clinical. My get out of jail card was we looked like a team that hadn’t done a whole lot together and that’s because we are a team that hasn’t. We need to get better, fast.”

“That’s Danny’s game. He’s got good technique, he’ll give you a bit outside the 18-yard-box but I wouldn’t say he’s a standout player outside the box.”

MILESTONE | Alex Byrne made his 100th appearance for United in last night's win against Athlone Town.

“It’s three goals on your debut,” added Furlong.  “I suppose it doesn’t really come much better than that and more importantly, three points.

“Anything in and around the 18-yard-box, I tend to latch onto. I probably could have had one or two more chances or half-chances even, but I’m happy enough with the chances that I did get and put away.”

#GUFCTV 🎥 | Watch all of the goals from United's 4-1 win against Athlone Town on opening night at Eamonn Deacy Park!