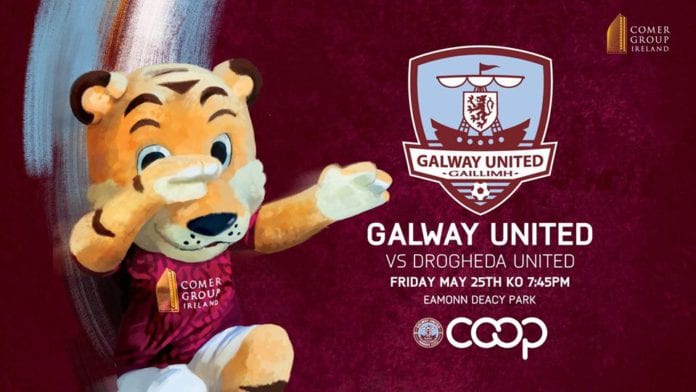 Galway United entertain Drogheda United in the First Division as two of the top three look to strike a major blow in taking the initiative behind leaders UCD.

Both teams trail the students by five points with a game in hand and whoever slips in this one may have considerable ground to gain for the automatic promotion spot.

Those travelling to Galway tonight will hope for a goal feast and the teams 2-2 draw in March indicates that could be the case.  Eoin McCormack gave the Tribesmen a two-goal interval lead in United Park before Drogheda pegged back the deficit hanks to Mark Doyle and Luke Gallagher.

However, missing that day were two players who’ve shared 11 goals in 2018 so far.  Galway’s leading marksman Danny Furlong was injured for the trip to Drogheda while the hosts were without the suspended Lee Duffy.

Eamonn Deacy Park hosts a huge game in the race for promotion on Friday evening! ☀️

Galway United face second place @DroghedaUnited. The Tribesmen will be aiming to continue their impressive home form and march up the league table. Don't miss it! Kick-off is at 7.45pm. #GUFC pic.twitter.com/x14YPdqwuJ

Also, out that evening were experienced duo Robbie Williams (Galway) and Sean Brennan (Drogheda) and they are expected to play a key role in this fixture.

After their defeat in Ballybofey, Galway United bounced back with wins over Athlone Town and Cabinteely, despite the concession of a strange consolation goal.  And they are undefeated in their last six home games that includes six wins.

Tadhg Ryan will take his place between the sticks; Marc Ludden, Maurice Nugent, Stephen Walsh and Williams will occupy the defence; and Alex Byrne and Ryan Connolly will be among the midfield.

Alan Murphy, Carlton Ubaezuonu, Conor Melody, Conor Barry and Stephen Kenny are the favourite for another spot and, as expected, if Gary Shanahan features, it will be his 150th appearance for Galway United since signing in 2014.  Furlong and McCormack are expected to start up front.

But Drogheda United also come into this contest on form as wins over Wexford FC and Athlone Town followed a 2-1 defeat to Finn Harps.  And they have scored in their last 12 games.

It’s hard to call this fixture but it will be a major surprise if it finishes 0-0.  Expect some goals but can one outscore the other?