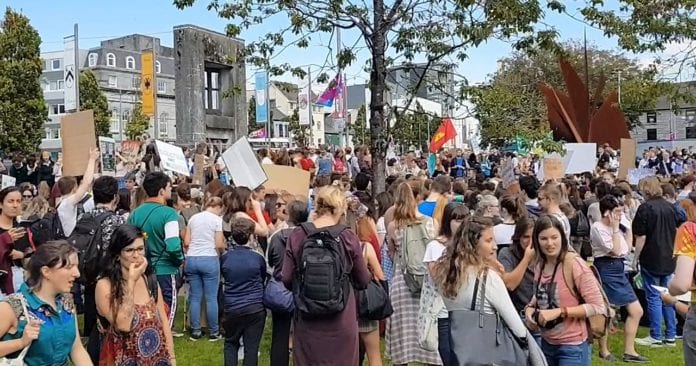 Eyre Square was packed with young people taking a day off from school today to join in worldwide climate strikes taking place around the world.

They’re following the lead of young activist Greta Thunberg who began the movement of children leaving school on Friday’s to go protest inaction on climate change.

Other large protests took place in Dublin, Cork, and Waterford today, with smaller groups coming together in other towns and villages.

In total more than 50 events have been organised around Ireland with thousands upon thousands of Irish school pupils taking part.

The scenes in Ireland are matched around the world with millions of young people taking to the streets today in the ‘Fridays for Future’ movement.

This weekend’s protests are shaping up to be the largest yet, with people taking part from more than 150 countries.

Young people are calling on government’s and business leaders to take drastic action to arrest catastrophic environmental damage due to climate change.

The strikes began in the Pacific islands where small islands nations at risk of being washed away by rising oceans have been some of the the most strident in calling for action.

The culmination of the strikes will take place in New York City where over a million people are expected to take part in a massive rally in front of the United Nations headquarters led by Greta Thunberg.

The UN is meeting for a climate summit next week to discuss concrete actions which can be taken to combat climate.

Before the summit the UN Secretary General António Guterres took the bold step of saying that countries which have not shown commitment to combating climate change and promoting sustainability will be blocked from speaking at the summit.