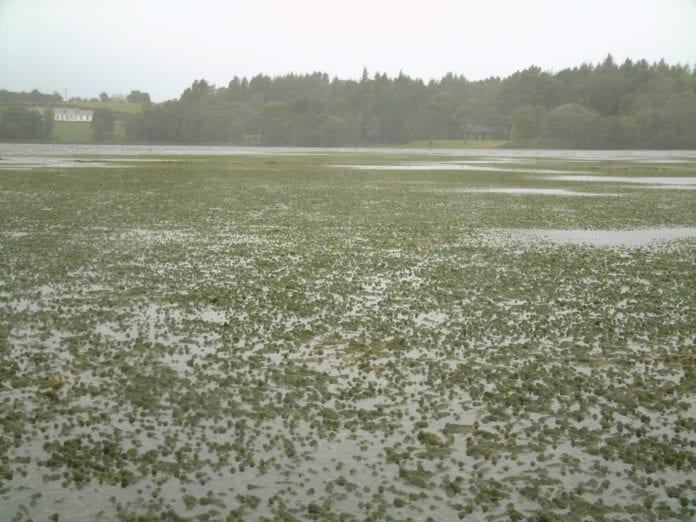 After the success of a project to remove invasive waterweed from Lough Corrib in Galway this year, funding has been allocated to see that works continue in 2019.

From January to July of this year, Inland Fisheries Ireland removed the invasive species of curly leaved waterweed from nearly 100 hectares of Lough Corrib.

To keep the work of maintaining Lough Corrib as an amenity for anglers and others, the Minister with responsibility for Inland Fisheries, and Galway West TD, Sean Kyne has committed €300,000 for further efforts in 2019.

The weed was cut and removed across 73.5 hectares (73,500m²) of the Lough at Barrusheen, Corrib View, Drumsnauv, and Farnaught Bays where there were particularly dense strands.

A further 21.3 hectares (21,320m²) were treated with light excluding jute at Cornamona, School House, Farnaught, Corrib View, and Ballynalty Bays, as well as Bob’s Island, and The Needles.

And 250m² of waterweed was eradicated by picking it by hand at Farnaught, Cornamona, and Corrib View Bays, as well as Bob’s Island and The Needles.

Because of its dense growth, it blocks off light for native plants and chokes up waterways, causing serious problems for boating, angling, and hydroelectric dams.

It was first introduced in Ireland by the horticulture industry to help oxygenate artificial waterways, but it spread into natural habitats by 2005, when it was first recorded in Lough Corrib.

Deputy Kyne said that it was important that resources be committed to curtail the spread of waterweed on the Lough next year, and in the future.

“I also welcome the new IFI research project commenced recently which will see scientists survey the distribution of the plant on the Lough.”

“I want to encourage liaison between IFI and National Parks and Wildlife Service and other bodies on the issue of aquatic invasive species so that a multi-agency approach can be brought to bear on the challenges involved,”he said

The NPWS are the state agency with responsibility for legislation covering invasive aquatic species.

For their survey of waterweed on Lough Corrib, the IFI is making use of modern technologies like aerial drones, remote marine vehicles, and advanced sensing tech.

Physical and environmental factors at the surveyed sites will be reviewed to understand their influence on the habitat and distribution of the weed.

This will help future operations to control this invasive plant be more effective.