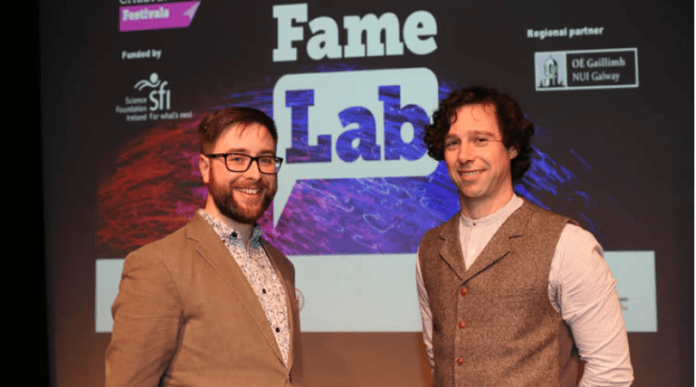 The winners of FameLab Galway are set to advance to the FameLab Ireland final which will be held at the Science Gallery in Dublin on Thursday, 12 April.

The goal of FameLab is to explain scientific concepts to a general audience in just three minutes. The competition is open to scientists, mathematicians, and engineers working across Ireland in both the public and private sectors.

The nine participants in FameLab Galway 2018 came from a variety of backgrounds and career stages ranging from undergraduate students to established Post-Doctoral researchers from fields as diverse as Anatomy and Data Analytics.

Presentations given were similarly diverse, featuring glowing fish, the importance of vaccination and a cardboard model of how gravitational waves affect lasers.

Eoin Murphy’s presentation, titled ‘The Ultimate Puzzle’, detailed the effects of Huntington’s disease and offered hope for potential treatments from the cutting edge of biotechnology.

Runner-up Christopher Lally spent time in the biopharma industry making pain medication for cats and dogs. His presentation about the revolutionary effects of plant breeding on food production and the future potential of genetic engineering won the public vote.

Dr Patrick Ryan, one of the event organisers and runner-up of last year’s competition said FameLab is a wonderful opportunity for science enthusiasts to communicate the impact science has had on all our lives.

“Science communication is becoming increasingly relevant to modern scientists and the high standard of this year’s competition is testament to the huge amount of work each competitor put into their presentation,” said Dr Ryan.

The winner of the National competition will have a chance to compete in the International FameLab final at the Cheltenham Science Festival, the UK in June 2018.