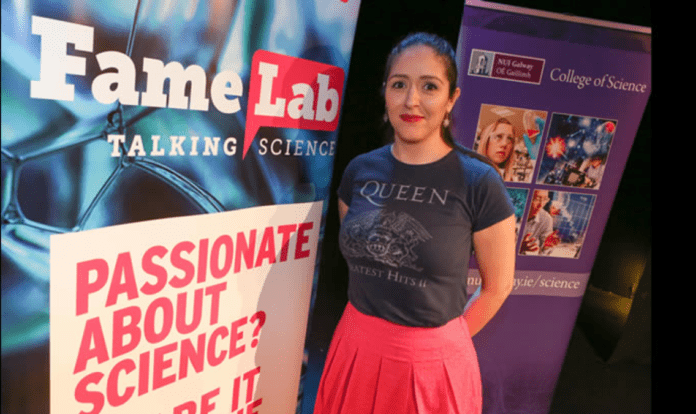 Update 1 March: “ Due to the national red weather alert, Famelab Galway event scheduled for the 1st of March has been postponed and will be rescheduled to next week. They will be making the new details available as soon as possible through their twitter account, @Famelab_galway and other social media accounts “

Science enthusiasts and scientists will battle it out this week for a place in the national final of FAMELAB, the largest science communication competition in the world.

This is the third year that a regional heat for the international competition will take place at An Taibhdhearc in Galway.

The event, on Thursday 1 March, is free to attend.

The participating contestants come from a variety of backgrounds, covering topics ranging from cancer to genetically modified food.

The competing scientists will be given a total of three minutes each to explain their research, or any scientific concept, as clearly and simply as possible, to a public audience and a panel of judges.

This will be followed by three minutes of questions from the judges and the audience.

Two finalists will be announced on the night and will participate in a communications master class in Dublin this March.

The finalists will then compete in the national final of FAMELAB, which will be held in the Science Gallery in Dublin on Thursday, 12 April.

The overall national winner will attend the Cheltenham Science Festival, UK in June 2018 and will compete in the FAMELAB International finals.

To attend the FAMELAB Galway regional final please book your free ticket at www.famelabgalway2018.eventbrite.ie or following on Twitter @FameLab_Galway.