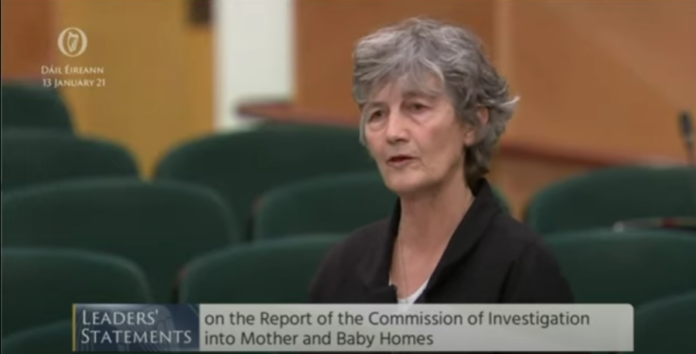 Catherine Connolly TD has hit out at the government in the Dáil for their handling of the Mother and Baby Homes report – and criticised the conclusions of the report itself.

She slated the ‘three unwise men’ – the Taoiseach, Tánaiste and Minister for Children – for not ensuring survivors of Mother and Baby Homes were given copies of the Report before it was published to the general public on Tuesday.

Speaking about the report, the Independent Galway West TD said that she struggles for words, and accused the government of placing ‘abuse on abuse’, referring to the manner in which the subject is being dealt with.

“So don’t stand here today and expect me to listen to you with patience when you tell us society did that.”

Deputy Connolly referred to the Tuam Home in her statement, drawing attention to the fact that it was under the control of Galway County Council, criticising the role of the County Manager throughout the years.

“Either we believe the women – or we don’t,” said the Galway TD, commenting on the conclusions of the commission’s report that there was no evidence of compulsion.

“If we don’t believe them, we’re adding utter hurt – they always feared they wouldn’t be believed.

“So I’m using my few minutes here to say I absolutely believe the survivors,” she said.

The exemption for over 70s from presenting a medical report when applying for or renewing a driving licence has been extended due to the...
Read more

There have been 60 additional deaths related to COVID-19 reported by the Department of Health today, one of which occurred in December, and the...
Read more
Load more