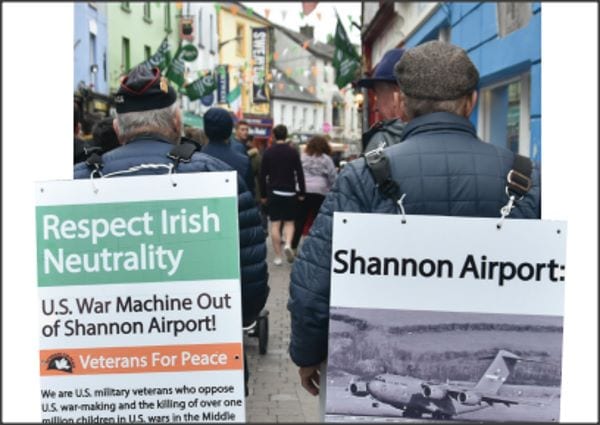 Two US military veterans will be marching through Galway as part of their March for Freedom protest against US military troops passing through Shannon Airport.

Galway Alliance Against War is organising a rally with Ken Mayers (82) and Tarak Kauff (77), US ‘Veterans for Peace’ as they stop in Galway on their walk from Limerick to Malin Head in an anti-war protest centred on US military usage of Shannon Airport.

The two are setting from Limerick Prison at 10am on Saturday on their Walk for Freedom and are expected to arrive at Galway Crystal at 12:30pm on Monday, September 16.

While in they are here Galway Alliance Against War is organising a peace march from there, through the city to Eyre Square, calling for respect for Irish neutrality.

Ken and Tarak were arrested and jailed for two weeks earlier this year for attempting to gain entry to a US military plane as part of a peaceful protest.

A spokesperson for Shannonwatch, which is organising the march, said “The Walk for Freedom is about Tarak and Ken’s freedom to return home to their families, freedom from war, and the freedom to respect and affirm a strong and peaceful Irish neutrality. Join us to see them on their way as they walk for freedom.”