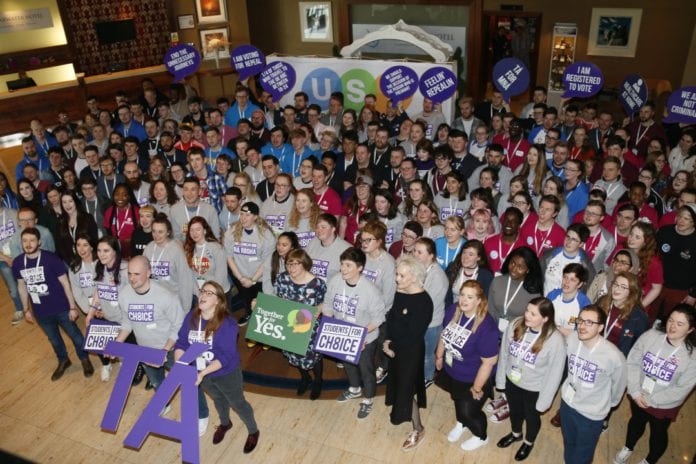 The Union of Students in Ireland today launched the national student-led campaign to repeal the Eighth Amendment at the annual student Congress in Galway.

The campaign, Students For Choice, will be registering thousands of students to vote ahead of polling day on May 25th.

Speaking at the launch, USI President Michael Kerrigan said that Students for Choice will ‘take the baton that has been passed to us from generations of activists, and we will take this over the line.’

“We cannot make any change to our barbaric abortion laws without removing the Eighth Amendment. We will be on the right side of history, and we’re bringing hundreds of thousands of students along with us. We’re ramping up to register students to vote, getting students ready to canvass, and making sure students get out and vote ‘Yes’ in May. Together we will vote ‘Yes’ to remove the Eighth Amendment,” he said.

USI is the national representative body for the 374,000 students in third level education on the Island of Ireland, and is a member of the national civil society campaign, Together For Yes.

USI registered 18,000 students who have never voted before between September and November 2017 , adding to the upwards of 80,000 students registered to vote by USI in recent years.