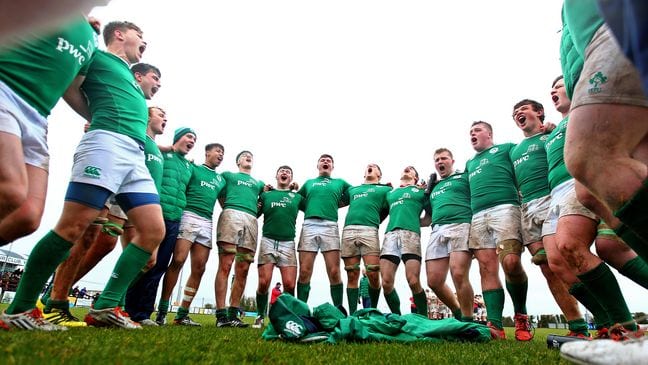 A total of 11 Connacht players have been selected for this week’s Irish underage internationals.  The U19s take on France today (Tuesday, 3rd April) at the University of Limerick at 5pm – the game was originally fixed for the Sportsground before it was moved due to the adverse weather conditions.

Prop Ryan Lomas, hooker Dylan Tierney, backrow Neal Moylett, scrum-half Colm Reilly and back three Hugh Lane were all named in the squad, as was Cian Huxford who unfortunately injured his ankle and is likely to miss the remaining games.

Tom Tierney’s charges will face France again at the home of Connacht Rugby on Saturday (kick-off 2.30pm).  The visitors had a recent outing against Romania, winning 41-7, and will play Scotland in Edinburgh after their two encounters with Ireland.

Out-half Dylan Prendergast has been named in the under 18 schools’ squad.  Head coach Peter Smyth has rotated his squad for their under 18 Six Nations Festival second-round clash with hosts Wales at Cardiff Arms Park on Wednesday (kick-off 2.30pm) and Prendergast starts for the first time.

While in the clubs & schools squad there were four Connacht players chosen.  They are tight head Liam Winnet, second row Darragh Murray, and centres Saul O’Carroll and Shane Jennings. Second row Iarlaith Laheen is among the standby list.

Mark Butler’s team play England U-18 Counties at HMS Temeraire in Portsmouth on Wednesday (kick-off 2pm) after last Saturday’s 51-12 over Canada’s under 19s.

Jennings shifts to the left wing from full-back and his Garbally College colleague O’Carroll lines out in midfield.  The 2018 teams will meet for a second time at the same Portsmouth venue on Saturday (kick-off 12pm).

Ireland u19 vs France u19 (5pm University of Limerick)

England u18 Counties vs Ireland u18 Clubs and Schools (2pm HMS Temeraire, Portsmouth)

England u18 Counties vs Ireland u18 Clubs and Schools (12pm HMS Temeraire, Portsmouth)

Ireland u18 Schools vs Scotland u18 (12pm Cardifff Arms Park)