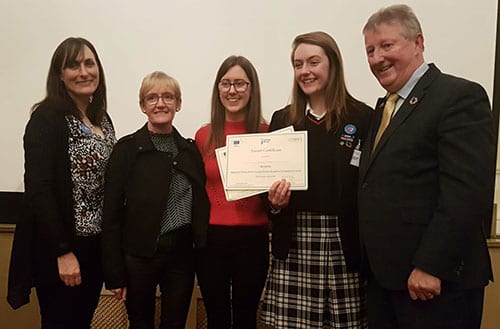 A student from Presentation College Tuam is the winner of the grand final of the Europe Direct National Soapbox Competition 2019.

Johanna Lane, from Bishop Street in Tuam, was the winner of the 18 and Under section of the Soapbox competition national finals which took place at the Royal College of Physicians in Dublin.

The Europe Direct National Soapbox Competition is organised by libraries around the country with competitors given three minutes to make a speech for of against the motion.

The theme for this year’s competition was ‘Climate Change is Not My Problem’.

Galway East TD Sean Canney congratulated Johanna on her win and praised the competition itself, saying that it “provides citizens from every European country an opportunity to have their say about European Union affairs”.

Eight libraries around Ireland host Europe Direct Information Centres, which offer citizens a direct link to the activities of the European Commission.

The Europe Direct Centre in Galway is located in Ballinasloe library.

“I was honoured to give a keynote address on the importance of libraries to our communities and the way in which they have become hubs for a whole range of services.”