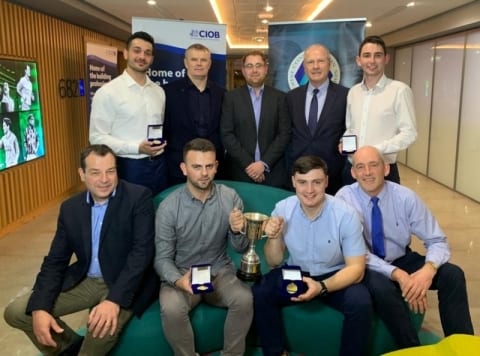 A team of building and civil engineering students in GMIT have won the coveted All Ireland Chartered Institute of Building Student Challenge 2019.

The multi-disciplinary team won the nationwide competition for developing the best detailed proposals for a complex building heritage project on a busy commercial site in inner city Dublin.

They beat off stiff competition from ITs and universities’ teams across the country to win the challenge which took place in the Croke Park Conference Centre, Dublin earlier this month.

The students’ project was a 1770s Georgian building in poor and unstable condition, needing both internal and external restoration.

Next to was a newer office building scheduled for demolition, with an ESB substation which powered the neighbouring restaurant.

The team developed plans to replace the sub-station whilst also creating a temporary advertising façade to ensure the restaurant remained appealing to customers and could stay open during the build.

With building regulations having become more onerous in recent years, they also drew up plans to ensure the entire project would be up to code while maintaining public safety during construction.

Following completion of the written planning, the teams were involved in two rounds of presentations of their plans to a panel of leading expert judges from industry and the professions.

The teams were firstly whittled down to a final three who were then further questioned by the judges in a second round of detailed evaluation.

GMIT lecturers and competition mentors John Hanahoe and Dr Martin Taggart paid tribute to the GMIT team,  saying: “This is a fantastic achievement by our students.”

“They performed to a very professional standard and really impressed the industry judges,” they added.

“The competition itself is a great opportunity for the students to engage in real life interdisciplinary practice, as well as it being an enjoyable and sociable experience.”