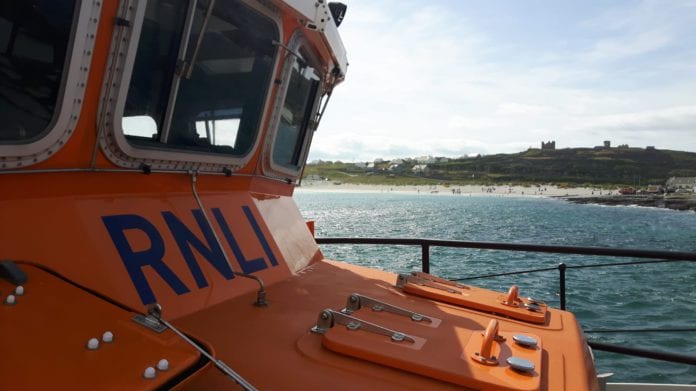 The Aran Islands RNLI lifeboat came to the rescue of the three people who found themselves stranded on a jet ski off Inis Oirr last weekend.

The all weather lifeboat from the Aran Islands RNLI station was launched in response to a call from the Coast Guard at 3:39pm on Saturday.

A jet ski with three people aboard had been reported in difficulty off the southwest coast of Inis Oirr.

The lifeboat David Kirkaldy #17-06 launched under Coxswain John O’Donnell and a full crew.

Weather conditions at the time of launching were good with a slight swell and a north west force 4 wind.

When they arrived on the scene the people were found to be uninjured, but the jet ski had broken down.

The people were brought aboard the lifeboat and the jet ski was towed to the island.

At Inis Oirr pier the crew helped find and repair the fault in the jet ski, and once it was working properly escorted the three back to Doolin pier.

Speaking after the call out Aran Islands RNLI Coxswain John O’Donnell said: ‘The volunteer crew members responded quickly and thankfully a successful rescue was carried out, with three people being brought safely ashore.

“For anyone planning a trip to sea,always wear a lifejacket, always carry means of communication and let someone ashore know where you are going and when you are due back.”

“Should you get into difficulty or see someone else in trouble call 999 or 112 and ask for the Coast Guard.”