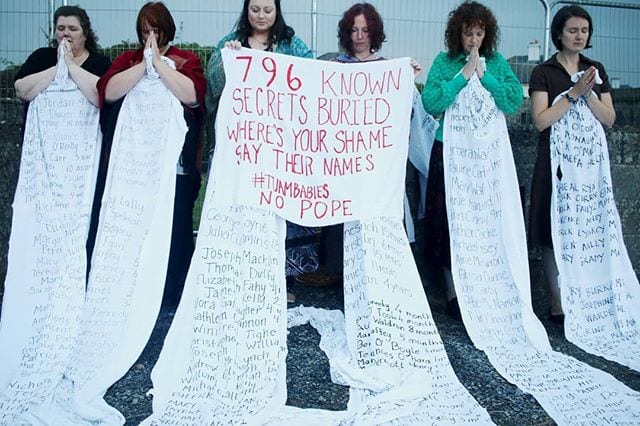 The names of all 796 children buried at the former Tuam Mother and Baby Home have been written on white sheets and sewn to the site’s construction fencing.

A group of Galway women have done this to protest the continued lack of action by the state to provide any proper memorial, burial, or justice for the children who died at the Bon Secours Mother and Baby Home.

They’re also protesting Pope Francis’ visit to Ireland for the World Meeting of Families, saying that it is hypocritical to throw out the red carpet for a papal visit when so little progress has been made on the issue of the systemic abuse of children.

“By welcoming the Pope, we welcome the abuse of the most innocent people in our community have and continue to endure.” said Erin Deacy, one of the women involved in the protest.

“796 children without a proper resting place , without names on a monument, without reverence and respect to the families that continue to grieve the atrocities of the church.”

With ten days looming until the descent of the Pope in Ireland… With millions of euros being spent – and the church and state still actively covering up crime and 'scandal' When will we stop bowing to false gods and authority? A collar does not make a good person. A habit does not make a good person. A promise and a prayer does does provide justice for crimes of sexual violence, neglect, and murder. The Pope has no place here. The church has no place in the state. The state owes it's people an explanation, apology, and to defend the lives and memories of the families they have let down. We will not be silent #nopope #tuambaby #galway

Next to every name on the list is the age that person was when they died.

The protest piece also highlights the ten women who dies at the Mother and Baby Home, putting their names on the list right next to those of the children.

Four of those women were buried by their families. But the remains of the other six remain unaccounted for, the organisers of this protest say.

A protest vigil is also planned at the site of the Tuam Mother and Baby Home on August 26, when Pope Francis will be visiting the shrine at Knock as part of his trip to Ireland.

At the site of the Mother and Baby Home there is a small plaque that reads: “In Loving Memory of those buried here. Rest In Peace.”

There is no other memorial, or any kind of official indication of the atrocity that took place there.