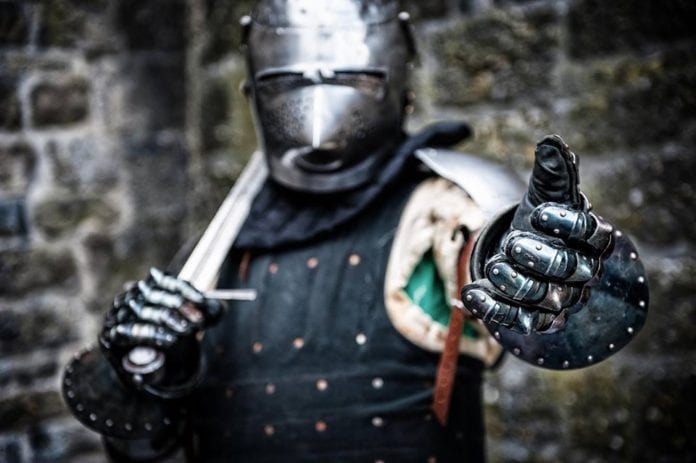 Get a taste of medieval life at Ireland’s best preserved Norman town at Athenry Walled Towns day this weekend.

The day kicks off at 1pm in Athenry Park with displays of medieval crafts and performances on all day, as well as getting a slice of the knight life (I am absurdly proud of that pun, no regrets) with medieval combat demonstrations and an archery range.

Lots of local groups and craftspeople will be on hand with old-timey displays of copper crafting, beadmaking, leatherwork, and… medieval balloons? Just get the kids a balloon and don’t ask questions.

The park will also be filled with performers from stilt-walkers and  medieval re-enactments.

Then things take a turn for the entertainingly violent with knife fighting displays and full contact medieval combat in plate armour.

There will be no audience participation in those last ones I’m afraid.

Speaking of men beating each other with sticks, we can’t ignore the other big event of the day.

That’s why the Heritage Centre is rolling their big screen out to the park to watch the All-Ireland hurling finals in the sun.

And since Galway is the European Region of Gastronomy this year you can bet there’s gonna be plenty to put in your gullet.

Athenry Bia Lover is bringing a wealth of artisan food producers and their goods for visitors to sample and buy from.

Or, if you want to lean into the theme of the day in your diet as well there’ll be demonstrations of traditional bread and butter making, and other authentic medieval food to get your hands on.

Walled Towns Day also marks the opening of the Athenry Heritage Trail, with brochures on hand to take you through Athenry’s medieval sites like the town walls and the well preserved Norman towerhouse.

Over at Athenry Community Centre there’ll be a series of talks on in the afternoon drawing connections between life 700 years ago and today for.

At 2pm Vivienne Campbell, owner of the Herbal Hub in Clare, will be showing some of the edible and medicinal plants that grow in the wild locally, and would have featured in everyday cooking and medicine.

From 3pm – 4pm Dr. Christy Cunniffe, Galway Community Archaeologist will doing a deep dig into the Archaeology of food.

And local historian Ronan Kileen will compare the shops of Athenry as they are now with what you would have found on the medieval streetscape centuries ago from 4pm – 5pm.

Over at the Heritage Centre there’s a fully explorable medieval world with costumes, recreations of an armoury and dungeon complete with torture devices.

Then take the family to the ‘Have a Go’ archery range and see which of you would make the best outlaw living in a nearby woods of your choice.

Wonder as the kids show inexplicable talent with one of history’s deadliest weapons and say goodbye to peaceful sleep forever.

It takes place tomorrow, Sunday August 19 from 1pm – 5pm all through town.