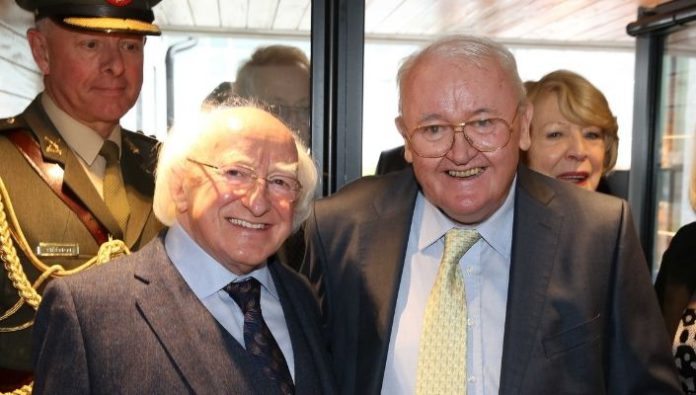 Tributes have been paid to well known Galway businessman and patron of the arts Donagh O’Donoghue, who passed away this week.

O’Donoghue developed many ties to the business, arts, and student communities in Galway throughout the decades.

As a business student at NUI Galway in the 1960s he was a member of Comhairle Teachta na Mac-Léinn, the predecessor to the current Students Union, alongside fellow members such as President Michael D Higgins.

In 1975 he succeeded his father as Group Managing Director of Thomas McDonagh & Sons Ltd, and grew the company substantially over the next 25 years.

Throughout his years he and his family were stalwart patrons of the arts in Galway, serving as a board member of the renowned Druid Theatre Company, among other positions.

“From initially making space available to our fledging company in 1979 to the gifting of the building in 1996, Donagh acted as a close and trusted confidant, both as Chairman and to me personally.

“Without his vision and support, I’m not sure Druid would be here today,” said Druid’s Artistic Director, Garry Hynes.

Other major directorships O’Donoghue held down the years include Bord na Móna, Broadcasting Commission of Ireland and Galway Airport, as well as board positions on IBEC and Galway Chamber.

President of NUIG, Prof Ciarán Ó hÓgartaigh, said “We are saddened to hear of Dr Donagh O’Donoghue’s passing and we extend our deepest sympathies to Marcia and his family.”

“His deep commitment over a long number of years and in so many ways to our university and his, and to the arts in Galway and its hinterland, has played an important role in Galway’s reputation as a groundswell for arts and culture.”

NUIG’s  O’Donoghue Centre for Drama, Theatre and Performance, which was named in Donagh’s honour, was officially opened in April 2017 by the President of Ireland, Michael D. Higgins.

The pioneering O’Donoghue Centre includes a 120-seat theatre space with retractable tiered seating allowing for multifunctional use and accessibility.

It also comprises of studio spaces, classrooms, and a workshop and rehearsal room that has had a transformative effect not only on the University’s students but on the vibrant cultural hinterland that surrounds the campus.