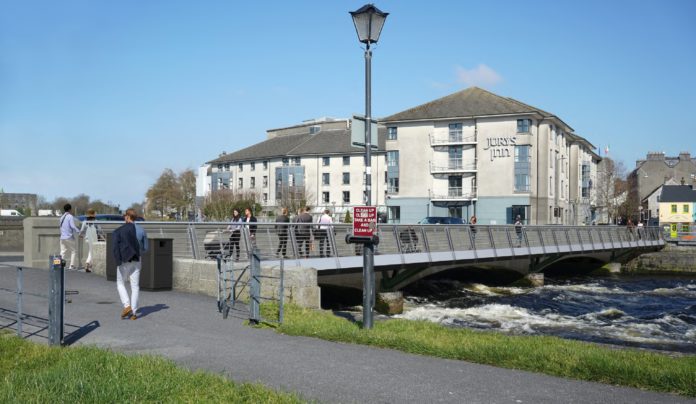 Galway City Council has announced plans to add a new pedestrian walkway onto the side of the Wolfe Tone Bridge.

The walkway and railway will be added to the southern side of the bridge, similar to what was added on the other side in 2004.

The new pedestrian walkway has a proposed minimum width of 2m, with a railing along the river side edge, compared with 2.5m on the other side.

The existing pathway on the south side of the Wolfe Tone Bridge would not be affected by this addition.

The Part 8 Planning Report for this project said that it is necessary to mitigate the current risk to pedestrians at the Wolfe Tone Bridge, where it is not possible to build a dedicated pedestrian bridge.

The design of the new walkway will be similar to what already exists on the other side, to maintain a consistent appearance.

The proposed plans will be available for viewing online, or at City Hall for four weeks until Thursday, May 26.

Written submissions and observation can be made to the city council until 4pm on Thursday, June 9.

This is one of two major improvements to pedestrian and cycling facilities in the works for Galway City.

The first sod was turned this week on the other, the eagerly awaited Salmon Weir Pedestrian and Cycling Bridge at Newtownsmith.

This is expected to open by early 2023, vastly improving transit in a frequently congested area for people walking or cycling.