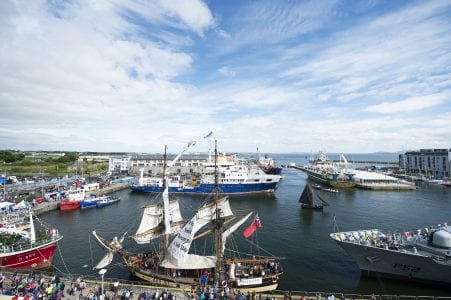 Tall ships, short ships, smart ships, and war ships; Galway Harbour is packed to the gills this week as every kind of boat that sails under the sun has shown up for SeaFest 2018.

SeaFest 2018 kicks off tomorrow with a whole range of events celebrating the Galway’s connection to the ocean including talks with cameraman Doug Allen, who’s filmed for the BBC’s Blue Planet and Frozen Earth, and exploring the depths in RTÉ’s Ireland’s Deep Atlantic with Ken O’Sullivan.

Seafood and Marine Sciences, so common on the west coast, will also be highlights of the weekend. But at the end of the day you really can’t have a hot summer on the ocean without a few boats. Even if they’re only visiting.

One of the latest additions to Ireland’s fleet of naval vessels, the LÉWilliam Butler Yeats, will be on show for people to take a look at the ship’s equipment and talk with the naval personnel who sail her.

The William Butler Yeats is a 90m Róisín class patrol ship commissioned in October 2016. Since then she’s been on patrol around the Irish coast, and from July to October 2017 she served as a migrant rescue ship in the Mediterranean where she and her crew rescued 704 people from the ocean.

Aside from all that don’t you just love these names. Dreadnoughts and Destroyers and whatnot, who needs that kind of overcompensation. Éire has her Róisíns on the water, and I for one hope they’re all named after poets.

Lt Cdr David Fleming, Commanding Officer of the William Butler Yeats welcomes the chance for visitors to see the naval services up close and ask about their mission.

“The Naval Service are delighted to support SeaFest 2018, and it will be an excellent chance for members of the public to come aboard and get a sense of what life is like on the LÉ William Butler Yeats.”

For those more interested in fishing fish out the water, the super trawler Girl Stephanie will be docked for the weekend.

Her owner, retired fisherman Pauric Conneely; his daughter, the aforementioned Stephanie; and his son and ship’s captain Tomás Conneely will be there with their crew to talk to people about life aboard a modern trawler and sustainable fishing practices.

“I come from a fishing background, both my parents are from Aran and worked in the industry,” said Tomás Conneely,  “I hope people will see that fishing is not a ‘stone-age’ career choice, as there are lots of opportunities.”

The Marine Institute’s RV Celtic Explorer will be putting in once again and will be open for guided tours all weekend. Consider it an unmissable opportunity to get a look at cutting edge marine science equipment that we haven’t a notion of understanding, no matter how much it’s explained. Impressive stuff though.

Harbour Master at the Port of Galway Captain Briain Sheridan welcomed the strange gathering of vessels and the people come to gawk at them, “We’re delighted to open up the harbour and showcase our ocean wealth to residents and visitors,” he said.

“The reason Galway is here is because of the ships and the sea, and SeaFest is a great reminder of Galway’s maritime heritage, and the value of our oceans for trade and transport.”

However, we must regrettably inform readers that the chances of any ship-to-ship combat are slim at best.