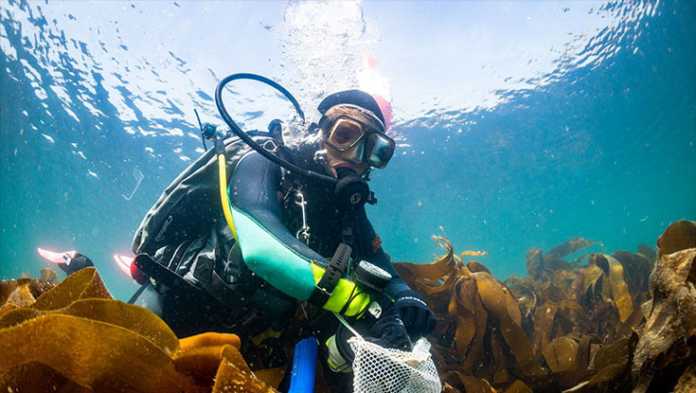 Dr Kathryn Schoenrock, a PhD researcher at NUIG, has been recognised for her her exceptional achievements with the Irish Research Council’s Early Career Researcher of the Year award.

Dr Schoenrock’s research at NUIG’s Ryan Institute focuses on the kelp forests that grow along the Irish coastline, looking at the importance of this ecosystem for the ocean and ourserlves.

Kelp forests are known to be a habitat for hundreds to thousands of marine species and recently they have been highlighted as an important blue carbon sink that may buffer against the impact of climate change in marine environments by absorbing carbon dioxide.

As a postdoctoral researcher in Ireland, Dr Schoenrock led an intensive kelp forest monitoring effort over the past three years, which is the first effort of its kind.

Her ground-breaking work in this field has made her the authoritative voice on Irish kelp forest ecology, and the productivity and biodiversity of these systems in nearshore waters.

Professor Ciarán Ó hÓgartaigh, President of NUIG, said that the university is extremely proud of her work, and congratulate her on her prize.

“Research defines us as a university and defines the excellence of NUI Galway. Awards such as this sustain the next generation of excellence in research so it is wonderful to see the quality of Kathryn’s research being respected and acknowledged in this way.”

The award for Early Career Researcher of the Year is given to a current or former Irish Research Council awardee who is at an early stage in their career.

They must be currently working in research in an academic institution and have demonstrated an exceptional level of achievement in their field at this stage in their career.

Speaking about her award, Dr Schoenrock said that she was honoured to receive it, and that this field of research was being recognised for its importance.

“What’s really nice is that this research could be applied to many technologies and pharmaceuticals,” she said.

“While this is basic natural history, I’m delighted it’s being recognised as essential for our understanding of the natural world, which is very encouraging for our future.”