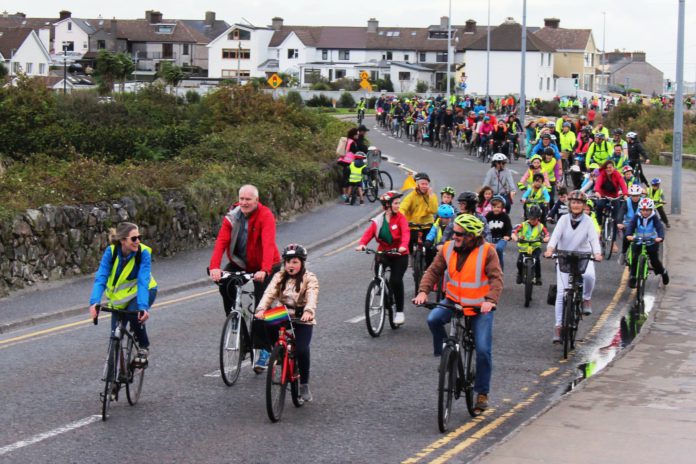 Galway Cycling Campaign has said that the Salthill Cycleway will form the blue jewel in Galway’s crown of connected urban greenways.

A proposal for the temporary 3-km coastal cycleway was passed by city councillors at yesterday’s council meeting, with 17 votes to one in favour of the cycleway.

The cycling group says that it will provide a safe route to schools, sports, and work for tens of thousands of people between Knocknacarra and the city centre via Salthill.

It will also make the city’s seafront a safer and more pleasant destination for people walking and cycling.

“The 17 to 1 vote in favour of the Salthill Cycleway is a huge endorsement from the children, residents, and businesses of Galway city, as expressed through our elected representatives,” said Kevin Jennings, Chair of Galway Cycling Campaign.

“It is a smart and cheap investment in developing permanent plans for an urban network of greenway, for climate action, and for safe mobility routes for people of all ages and all abilities.”

Sunday’s community cycle organised by Galway Urban Greenway Alliance in advance of the vote, supported by East of the Corrib Cycle-Bus and Galway Cycle-Bus, showed the depth of support for greenways and cycle routes in Galway city.

It was the biggest community cycle ever held in the city, and hundreds of people of all ages and abilities showed up despite the weather conditions.

Martina Callanan, Deputy Chair of Galway Cycling Campaign, said that rain doesn’t stop ordinary people and families from choosing to cycle – but that non-existent or poor quality cycling infrastructure does.

“So let’s immediately access the funding promised by the Minister for Transport, build this coastal mobility route, and get Galway moving,” she said.