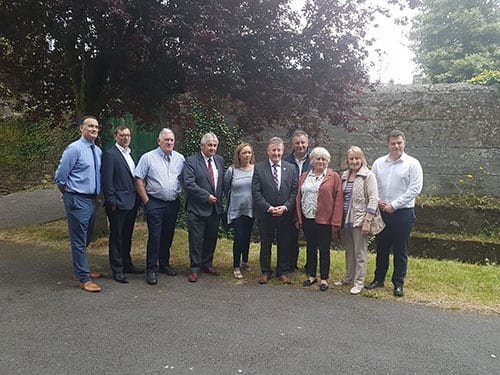 This week has seen the launch of the Loughrea Walks Project to restore the historic fabric of the former Clanricarde estate.

The Department of Community and Rural Development has awarded €100,000 for the first phase of restoration work on the Loughrea estate’s walls and bridges.

The project also includes the moat which surrounded the 800 years ago, the only medieval moat in Ireland which is still functioning.

Galway East TD Seán Canney, whose department is providing the funding, launched the project with the Walks Project Committee this Friday.

“I want to congratulate the Walks Project Committee on their successful application for funding,” Seán Canney said, adding that the historic grounds have “fallen into a serious state of disrepair.”

“I am equally delighted that the restoration and conservation works will be carried out by tradespeople who are highly experienced in this field.”

Work is due to get underway on the project in the coming week, with an estimated final price tag of €450,000.

The town of Loughrea was founded in 1236 by the Anglo-Norman knight, Richard de Burgo.

The Normans dug a channel from Loughrea Lake to create the moat so that the town would be protected by water.

The origin of The Walks is uncertain but the feature appears in a map of the town from 1791, when it was referred to as The Clanricarde Walk and River.

The river in The Walks is vitally important to the Loughrea Lake fishery, acting as a nursery for baby brown trout until they are mature enough to migrate back into the lake.