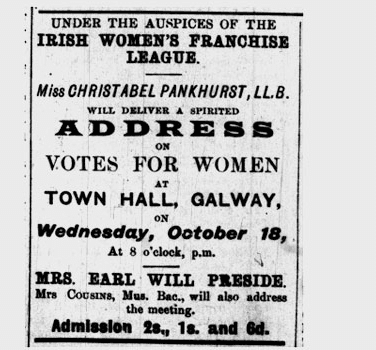 A new series of talks, performances, exhibitions, and readings on next month will look at how women shaped the history of the West of Ireland.

Galway’s Great Read – Women of the West: Art, Citizenship and Literature is launching its programme of events is being launched tomorrow evening at the Town Hall Theatre with an opening event.

A century ago this year, after a long campaign the first steps were taken to finally extending the vote to women.

The Representation of the People Act 1918 did not give all women the vote but it was a major victory for the suffragettes who had fought for years by that point.

Monday evening’s ‘Suffragettes in the Town Hall’ event will re-image the public talk about women’s suffrage held at Galway Town Hall on October 18, 1911.

Through a night of life-stories, music, and art the event will look at how that talk by the Irish Women’s Franchise League helped influence public opinion on women’s suffrage.

This free event is on at the Town Hall Theatre on at 8pm on Monday, October 8. Attendance is free but tickets must be booked ahead of time.

Galway’s Great Read is organised by Galway Public Libraries, and the events taking place will be held at libraries around the county.

Speakers and artists taking part throughout November include:

The dates and venues for each event will be announced with the programme launch tomorrow.

All events in Galway’s Great Read will be free to attend.