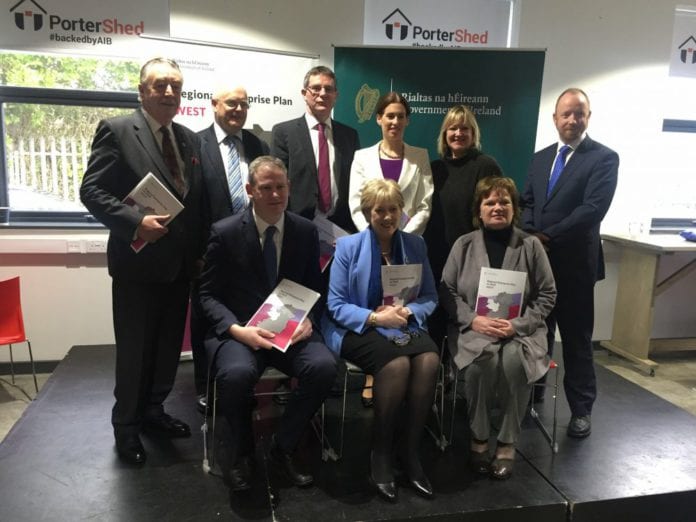 The new Regional Enterprise Plan for the West of Ireland has set itself an ambitious goal of increasing employment by 10-15 percent.

The plan aims to create employment by advancing six objectives key to the west, the life sciences, continued tourism growth, the creative sector, Agricultural Technology , aligning training and education to local current and future skills needs, and enhancing the quality and availability of enterprise space.

Minister for Business and Enterprise Heather Humphreys launched the Regional Enterprise Plan at the Portershed in Galway city this week.

Over €7 million is being invested in strategic projects under the Enterprise Plan, including a €2.5 million investment in the Portershed.

Other projects supported by the plan include Galway City Innovation District, the Páirc na Mara Marine Innovation Development Centre in Cill Chiaráin and the BIA Innovator Campus in Athenry.

Galway West TD and Gaeltacht Minister Seán Kyne said the west was fortunate to have strong clusters of particular industries.

He added that creative sector here had benefited immeasurably from the presence of TG4 and the strong Irish language base.

Since the first Action Plan for Jobs in the West was launched four years ago employment figures in the region have gone up by 28,400 Deputy Kyne said.

According to CSO figures unemployment in the west has fallen from 12.6% to 6.6% in the same time period.

The new Regional Enterprise Plan was drawn up by officials from the Department of Business, Enterprise and Innovation.

During this process consultations were held with the IDA, Enterprise Ireland, local authorities, the Western Development Commission, Údarás na Gaeltachta and many other interested parties.

Minister Humphreys said the west was ideally placed to come up with “innovative, collaborative projects of scale which can deliver real economic benefits for this region.”