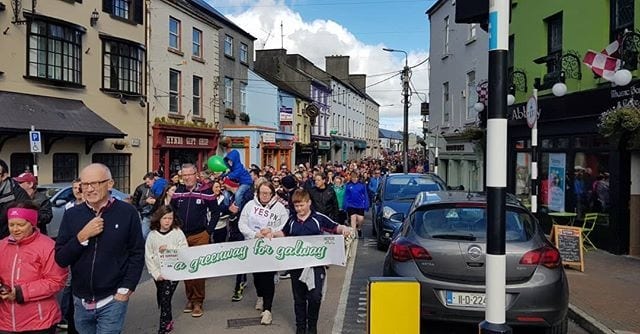 Thousands of people attended a rally in Tuam yesterday to support expanding the greenway network in Galway along the Athenry – Tuam – Milltown rail line.

Galway County Council is voting today on whether to support a feasibility study on a greenway for walking and cycling along the disused rail line.

The project has been nicknamed the Quiet Man greenway because the route goes through Ballyglunin railway station that was made famous by the movie The Quiet Man.

Supporters of the greenway, including Galway Cycling, have said that CIE is not opposed to the plan, and that the rail line could still be reopened if it’s made into a greenway.

Other people want the council and government to instead restore rail services between Athenry and Claremorris as part of the Western Rail Corridor.

The West on Track campaign pointed out that passenger numbers on other sections of the line have been increasing dramatically, with the number of people using the Ennis to Athenry line going up by nearly 300% since 2011.

Councillor Peter Roche, a strong supporter of the Quiet Man greenway, visited the rail line with councillor Moegie Magher to study its condition ahead of the council meeting.

Others have said that any action by the council should wait for the results of a government review into the Western Rail Corridor.