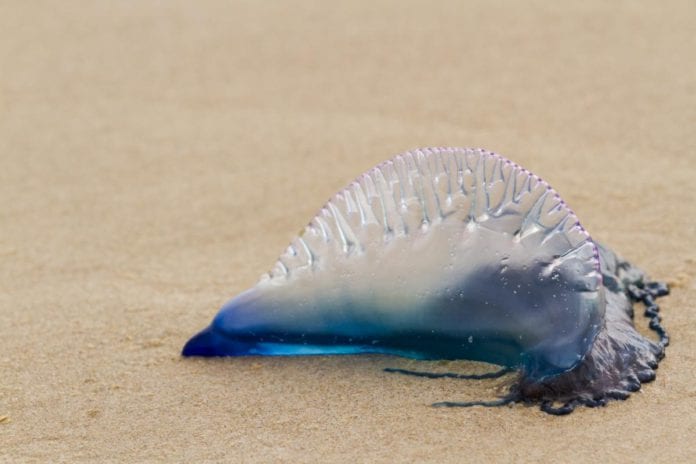 People fancying a trip to the beach in Galway City today are being urged to take care after reports of Portuguese Man o’War washed ashore.

Galway City Council say that there have been reports of Man o’War washed up on Silverstrand beach, and are urging the public to be careful.

Often mistakenly called a jellyfish, though it is an easy mistake to make, a Man o’War is a colony of marine creatures called polyps which live symbiotically together.

An extremely dangerous creature, A Man o’War can grow up to 30cm long, with a 15cm a float above the water, and has a distinctive silver, blue colour with a reddish tinge on the underwater section.

Its tentacles are far larger than the rest of its body, stretching for an average 10 metres through the water, and deliver a dangerous venom.

“A man-of-war sting is extremely painful and even dead ones washed up on shore can deliver a sting. The public are advised to exercise caution in the vicinity,” the city council said.

Galway City Council has received reports this morning of Portuguese Man o'War Jellyfish washed up at Silverstrand Beach. A man-of-war sting is extremely painful and even dead ones washed up on shore can deliver a sting. The public are advised to exercise caution in the vicinity. pic.twitter.com/blIre9cnc3

While a sting from one is not usually fatal to humans, it can cause swelling of the airways, fever, and breathing difficulties that may potentially kill.

The tentacles are far more dangerous than those of most jellyfish as they can remain highly venomous for days after the creature is dead.

Multiple Man o’War sightings were also reported in the waters around the city at roughly the same time last year.