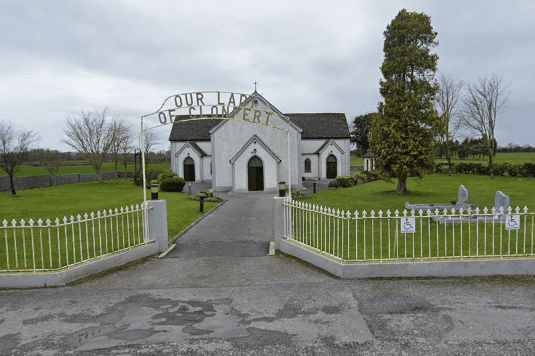 Our Lady of Clonfert Church near Ballinasloe has been granted planning approval for refurbishments to modernise aging systems and remove ill-advised changes made in the 70s.

Planning permission was granted for work on the Roman Catholic Church which includes replacing its existing lighting, sound, and heating systems, as well as completely rewiring the church and making alterations to its interior.

“The proposal involves minimal intervention to the existing building other than opening up a new door and closing up an existing door,” the application states.

“The church was radically altered in or around 1970 and unfortunately many of its architectural features were lost”.

“The roof structure was replaced and now consists of a tiled roof with felt underlay over rafters supported by steel structures”.

It is intended to remove the polyurethane ceiling tiles and replace them with insulated panels situated between the rafters and plasterboard beneath.

Other renovations will include removing the carpets and replacing them with timber floorboards, removing the free standing confession box and making alterations to the sanctuary.

The current door between the sanctuary and sacristy will also be closed up and a new one opened which will be concealed behind a false wall.

The timber surround to the alcove housing the statue of Our Lady of Clonfert will be taken out and a new marble insert will be placed within the alcove.

Galway County Council granted planning permission for the refurbishments to this church with four conditions attached.

Among those, a full photographic record must be kept of all works done, and an architect must confirm that the work was carried out in accordance with conservation practices.

The materials for the floor finishes, altar furniture, and alterations to the statue area must also be agreed on with the county council in advance to protect the architectural heritage of the church.