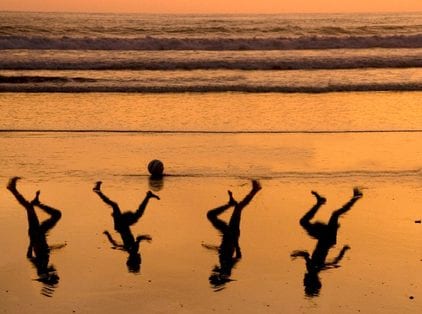 The Gaza Kids to Ireland are coming back to Galway!

A group of children from the Palestinian territory will be playing in Kinvara on Monday, 31st July at 3pm, in what will once again be a joyous occasion.

Incidentally, Kinvara became the first town in Ireland to boycott Israeli goods, as pro-Palestinian activist Joe Loughlane recently pointed out in an interview .

Kids from Al Helal Academy in the Gaza Strip, described by some as an ‘open-air prison’, will be playing matches in many towns and cities across Ireland in the coming days.

After being in Ballybrack, Co. Dublin today, they will make their way west tomorrow, and take to Killina pitch in the afternoon.

Last year, Israel blocked the children from leaving Gaza for their scheduled trip, and they were required to postpone and reschedule their entire trip when their permits were finally granted in late July.

But upon arriving in Ireland, the trip was successful, highlighted by thier meeting with President Michael D. Higgins.