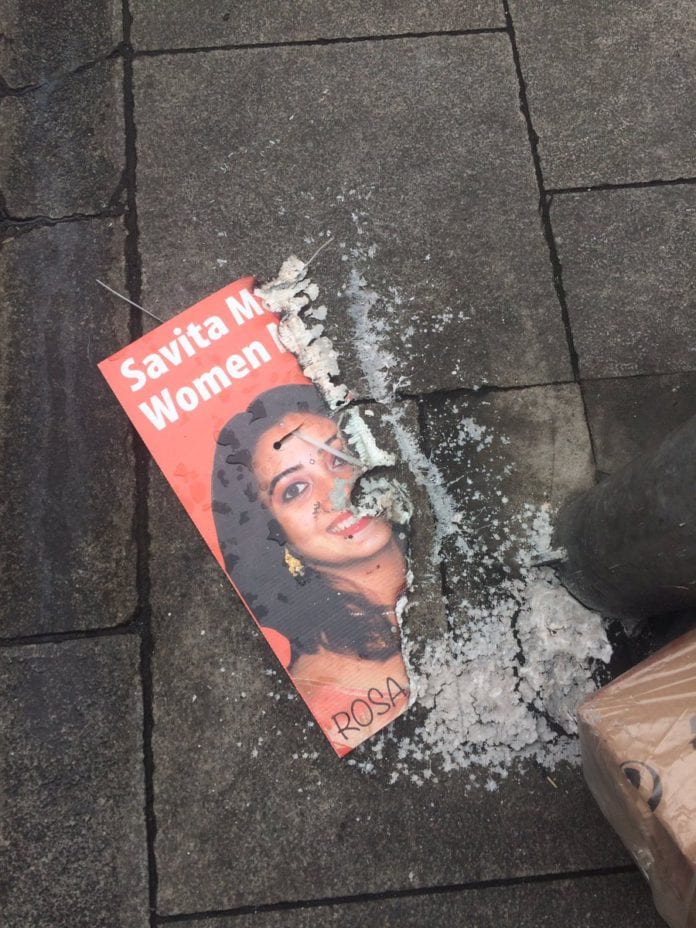 As the referendum campaigns for and against repealing the eighth amendment are nearing the home stretch – with voting set to start in just three days – the fight is turning increasingly ugly.

Reports of theft and vandalism of posters on both sides are pouring in through social media.

The assault on our campaign has been unprecedented: thousands of posters vandalized and removed, volunteers assaulted and intimidated and abused online. But the generosity of Irish people has no limits, and receive new encouragement every day #LoveBothVoteNo #8thref pic.twitter.com/yOwkCbPhZt

Today as I was walking up O'Connell Street, LMK, I was shocked to see someone walk out of "Christ Church" with a snips and cut down "Stop Shaming Women" posters… Fine if you don't agree with it but both viewpoints still need to be represented in a referendum?! 😥 #RepealThe8th pic.twitter.com/bASjD4JgI2

These incidents are used by both Yes and No campaigners as evidence of the other side’s moral inferiority.

But one tweet has taken the internet by storm – showing a photo of a burned Yes poster with Savita Halappanavar’s face on it.

Someone set fire to a poster of Savita. Someone actually did that to this woman's image. I have no words for this. pic.twitter.com/35YUqLKCIg

“Someone set fire to a poster of Savita. Someone actually did that to this woman’s image. I have no words for this,” reads the tweet by user @aifreckle.

Commenters on the image weighed in, saying the burning of the Savita poster was “awful”, “horrendous”, and “shameful”.

One person noted “I hope her parents don’t read this,” a sentiment echoed by other commenters on the post, with one user saying “Poor family…haven’t they been through enough!!”

It's awful. The yes posters on my street have been taken down and replaced with no posters. I hope her parents don't read this.

Halappanavar was a 31-year-old Galway resident whose death in 2012 at University Hospital Galway of a septic miscarriage after being denied an abortion sparked massive nationwide protests.

Her story is widely used by the pro-choice movement as evidence that the eighth amendment to the constitution can result in poor medical outcomes for pregnant women.

Halappanavar’s husband has since settled a case with the HSE and moved to the United States.

Her parents have supported the campaign to repeal the eighth.

Abortion is a controversial issue and emotions are running high for campaigners and politically-minded citizens.

But with accusations flying with increasing vitriol, many would rather the vote simply be over – one way or the other.

At this point I'm starting to feel a real fatigue with the referendum. Only a few more days it'll be over. No more politics, no more #loveboth. Saturday 26th will be a good day when the 8th is repealed. #repealthe8th