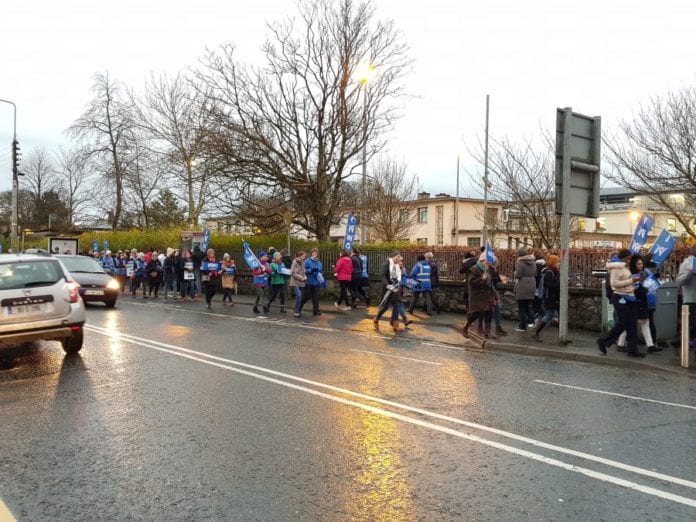 Galway’s nurses and midwives have taken to the picket lines again this morning to protest unfair pay and working conditions.

The Irish Nurses and Midwives Organisation is leading a nationwide strike of almost 40,000 nurses today, their second day of industrial action over pay and retention issues.

Nurses and midwives in Galway are protesting outside University Hospital Galway this morning with widespread support from the public.

This is only the second nationwide strike in the history of the INMO, and has come about as nurses say that poor pay and working conditions have made it impossible to retain staff.

Nurses rejected a proposal by Health Minister Simon Harris and Minister for Public Expenditure Pascal on Monday for new talks to resolve the dispute.

Crucially, the two minister said that the talks should address staffing levels and working conditions, but not pay which nurses have said is key to retention difficulties.

General Secretary of the INMO Phil Ní Sheaghdha said the offer was “spin masquerading as substance” and focused on issues which had already been agreed on in 2017.

Despite agreeing on those issues at the time, the INMO said that the government was unable to implement many of the proposals because they couldn’t find sufficient staff.

Meanwhile, here in Galway nurses are digging in for the long haul over today and beyond.

Gavin Mulhall, a nurse at University Hospital Galway says “We’re resolute. it’s day two of a long day, we know this but we are willing to go through with this.”

According to the HSE up to 50,000 appointments could be impacted by the ongoing strikes.

If no resolution is reached with the government then a further three day strike is planned for next week from February 12-14 when the INMO will be joined on the picket lines by the Psychiatric Nurses Association.

“Our message is clear. We will not be going away, resolving this dispute requires direct engagement from the government, recognising the real recruitment and retention problems in Irish nursing and midwifery,” Phil Ní Sheaghdha said.

“We simply want to be able to do our jobs, but our health service cannot hire enough nurses and midwives on these uncompetitive wages.”

“As ever, we remain available for talks with the government for any realistic proposals.”