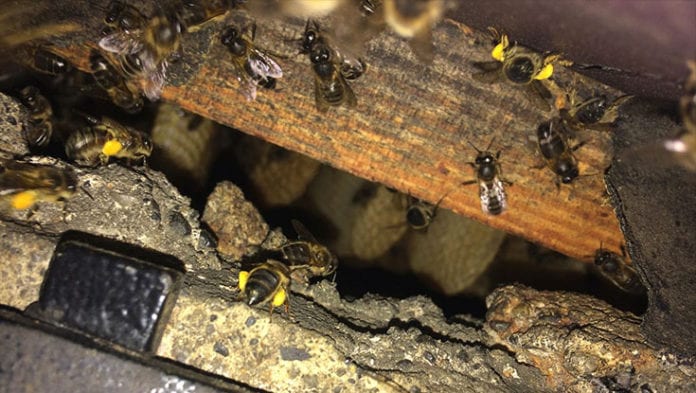 NUI Galway has launched an online survey to build a picture of where honey bee colonies can be found nationwide and to help in their conservation.

Zoology researchers at the Ryan Institute are inviting the public to submit sightings of wild honey bee colonies living anywhere other than a beehive online.

Of the 99 species of bee in Ireland there is only one native wild honey bee, a sub-species called Apis mellifera mellifera or the Northern black bee, which is considered extinct in the wild across much of its European range.

It’s hoped that information gathered through these online surveys will help to develop conservation strategies to ensure the Northern black bee does not go extinct in Ireland as well.

People are asked to include a photo or description of the colony entrance, its location, and how long it has been there.

Other information that the researchers would find useful is how high off the ground it is, what direction the entrance is facing, are the honey bees behaving aggressively, and has a beekeeper taken a swarm from the colony.

Professor Grace McCormack who is leading the project at NUIG said “The public are absolutely critical for data collection on this scale and indeed for conservation efforts.”

“We gathered some promising preliminary data from a previous pilot project in 2016 and we are now working with the National Biodiversity Data Centre seeking help from citizen scientists to extend the study to this online survey and discover what wealth of wild honey bees remain in the Irish landscape.”

Over 200 reports of honey bee colonies in buildings, trees, walls and a mixture of other types of cavities were received from the pilot project.

Honey Bee colonies in Ireland are threatened by the invasive Varroa destructor parasite which usually kills a colony within two years unless chemically treated.

Follow up research has shown that some of these wild free-living colonies recorded in the pilot project have appeared to survive for over three years without human intervention.

This has been described as “heartening for not only wild honey bees but also the beekeeping industry.”

This project launching now is a collaborative effort of NUIG with the National Biodiversity Data Centre, the Native Irish Honey Bee Society, the Eva Crane Trust, and the Federation of Irish Beekeeping Associations.

John Little, Chair of The Native Irish Honey Bee Society said that the native black honey bee forms the bedrock of beekeeping in Ireland and is a crucial natural pollinator.

“Regrettably, the twin threats of the introduced Varroa destructor parasite and the continued importation of other honey bees has placed both managed and native wild honey bees at risk”.

Honey bees are also suffering from the loss of food supply and places to live that comes with the destruction of their natural habitats.

“Wild colonies surviving without human intervention, whether in a tree or a house roof, are an important genetic resource for the conservation of honey bees and a possible solution to Varroa,” John Little added.

Honey bees typically like nesting in elevated cavities like hollows in trees, walls and roofs of buildings, old houses and castles.

They can be particularly noticeable when workers are seen frequently flying to and from the nest entrance on warm sunny days.

To participate in the survey and record sightings visit records.biodiversityireland.ie/record/wildhoneybeestudy.