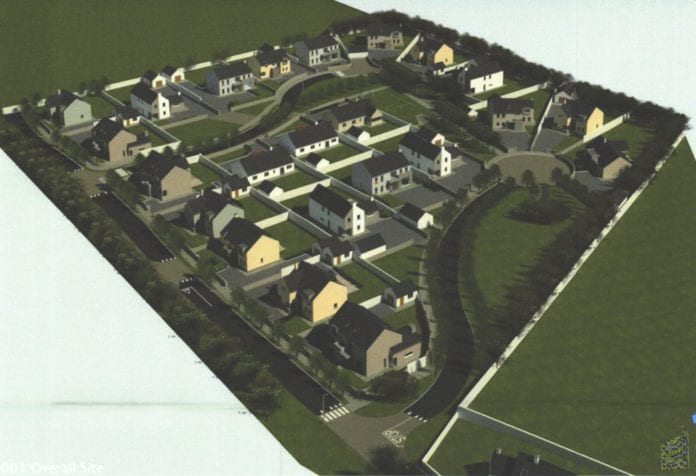 The rejection of plans for a €6.6 million housing development in Lackagh, Turloughmore has been appealed to An Bord Pleanála.

Planning permission had been sought for a housing development at Lackaghbeg next to the existing Woodlands estate.

The development would consist of 24 detached houses with garages serviced by public water and a private sewerage system within the Flynn’s of Lackagh Complex.

Access to the estate would be through the existing road serving the HSE, graveyard, and adjacent housing developments.

Planning permission was previously granted to Thomas Flynn, the applicant’s father, to build 13 houses on this site.

However Mr Flynn passed away in 2013 before work could begin on that project.

Acting on behalf of the applicant, Oliver Higgins Consulting Engineering said that the proposed housing development is just a short walk from Lackagh village centre.

Their report added that an emphasis has been placed on tree planting along the roadside to create a tree verge and reduce the visible impact.

A number of submissions were made by residents of the Woodlands estate saying that tree planting along the boundary of this development would obstruct light from their homes.

Concerns were also expressed about the proximity of the development to a gas pipeline and overhead power lines.

Galway county council rejected the planning application on April 24 of this year.

In refusing permission the county council said that this development could be prejudicial to public health because of deficiencies in the sewerage systems in Lackaghbeg.

The council also said that it would not “adequately connect with nor reinforce the existing urban form of Lackagh” due to being in an isolated, outer edge location.

Maria Flynn lodged an appeal against the county council’s decision to refuse planning permission with An Bord Pleanala on May 14.

Oliver Higgins Chartered Engineers argued in the appeal documents that an upgrade to the wastewater treatment plant serving that area has been approved under the county development plan.

This upgrade had a specific goal of increasing the number of people in the area it could accommodate.

It is proposed that this estate would connect to that upgraded treatment system.

In relation to the character of the area, the developer said the design of the estate is in keeping with the rest of Lackagh and pointed to other nearby residential developments which have been approved by the council recently.

The appeal finished by saying “This is not speculative development by some ‘unscrupulous’ developer”.

“This development is proposed by a family that have resided in Lackagh for over 170 years and have strong intrinsic links with the local community”.

“This development was specifically proposed in order to provided a good range of high quality housing for the community”.

An Bord Pleanála is due to rule on this appeal by September 16.