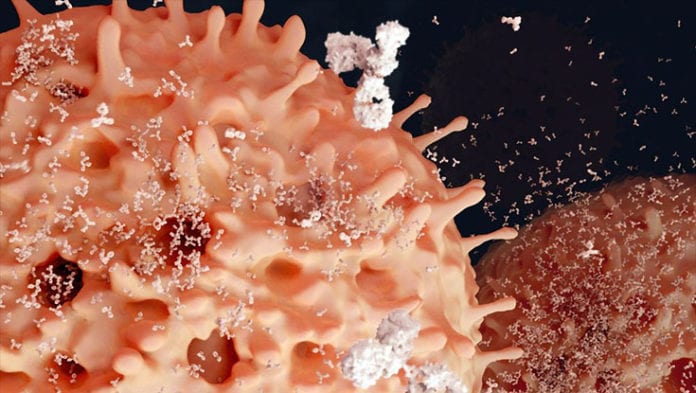 A clinical trial taking led by NUI Galway has shown promising results in the treatment of Multiple Myeloma blood cancer.

The trial investigates whether adding a new treatment, the drug Daratumumab (DARA), to the standard chemotherapy package of Cyclophosphamide and Bortezomib would improve outcomes for newly diagnosed patients.

So far 17 out of 18 patients have had a good response to the treatment, and half have had an excellent response, with no evidence of minimal residual disease in genetic testing.

Prof. O’Dwyer said this new treatment is “safe and convenient has the potential to become an important new treatment option for patients with Multiple Myeloma”.

“A European trial, which will include Irish patients, hopes to confirm the superiority of this treatment over current standard treatment, and will be launched shortly.”

Multiple Myeloma is a blood cancer arising from a type of white blood cell called a plasma cell.

This blood cancer impairs the production of red blood cells which carry oxygen, as well as damaging the bones and kidneys.

Every year in Ireland around 250 people are diagnosed with Multiple Myeloma and 170 succumb to the disease.

This new study is the result of collaborations across a broad range of partners including NUIG, Cancer Trials Ireland, the Irish Cancer Society, Science Foundation Ireland, Janssen Pharmaceuticals, the Health Research Board and BCNI investigators.

This clinical trial is the first homegrown trial to be conducted by Blood Cancer Network Ireland.

It represents a bench to bedside approach where scientific insights from the laboratory are applied to developing new and improved ways to treat patients.

Notably Irish patients on this trial received access to DARA which would not have been possible without this trial and it saved the taxpayer approximately €4 million in drug costs.

Crucially it showed that the reason for the excellent results was that the combination of the two treatments activated the immune system, increasing its ability to kill the cancer cells.

He thanked the public donations and patient patient participation that allows research with a “huge potential to significantly improve the lives of future cancer patients” to take place.