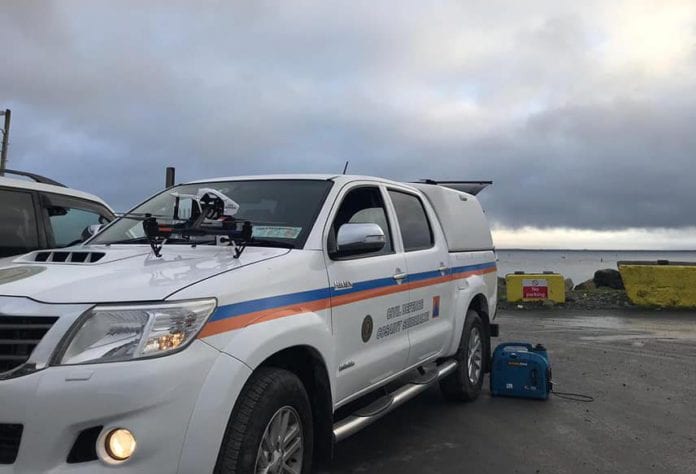 Galway Civil Defence will be adding to their capacity to respond to national emergencies and extreme weather events with a new emergency vehicle.

Sixteen Ford Ranger Crewcab Pickup Vehicles will be joining the Civil Defence fleet in the coming weeks, and one of the four wheel drives has been allocated to Galway.

“The vehicles will improve the four-wheel capability of the Civil Defence fleet and further improve its ability to support the Principal Response Agencies.

“During serious weather events, such as Storm Ophelia in October 2017 and Storm Emma in March 2018, the Civil Defence fleet of four-wheel drive vehicles were fully deployed.”

She added that the new vehicles would assist volunteers in many tasks such as assisting local authorities, the HSE, the National Ambulance Service and An Garda Síochána.

During Storm Emma, Hildegarde Naughton said, many volunteers were involved in assisting vulnerable people including elderly who found themselves snowed in.

The purchase of vehicles was approved by Minister Kehoe this week, as part of a €500,000 allocation from the Dormant Accounts fund of the Department of Community and Rural Development.

The number of people receiving pandemic unemployment payments in Galway has continued to decline for the third week in a row.There are 25,082 people...
Read more
HOUSING

Today’s announcement of branch closures across the island by Bank of Ireland is the "wrong decision at the worst possible time", a Galway West...
Read more
Facebook
Twitter
Pinterest
WhatsApp